A Florida project is taking shape with sound strategies in place 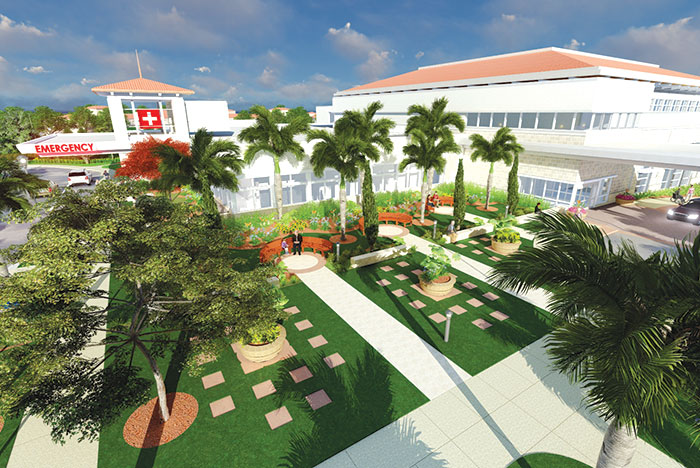 Designing a hospital is a complicated enterprise, but there are a few aspects of the process that are common enough that they tend to drive hospitals in the same general direction.

For instance, emergency departments (EDs) need direct vehicular access, while surgery and imaging need to be grouped together and close to the ED. As a result, the larger footprint of the hospital reveals itself around this critical care triangle. 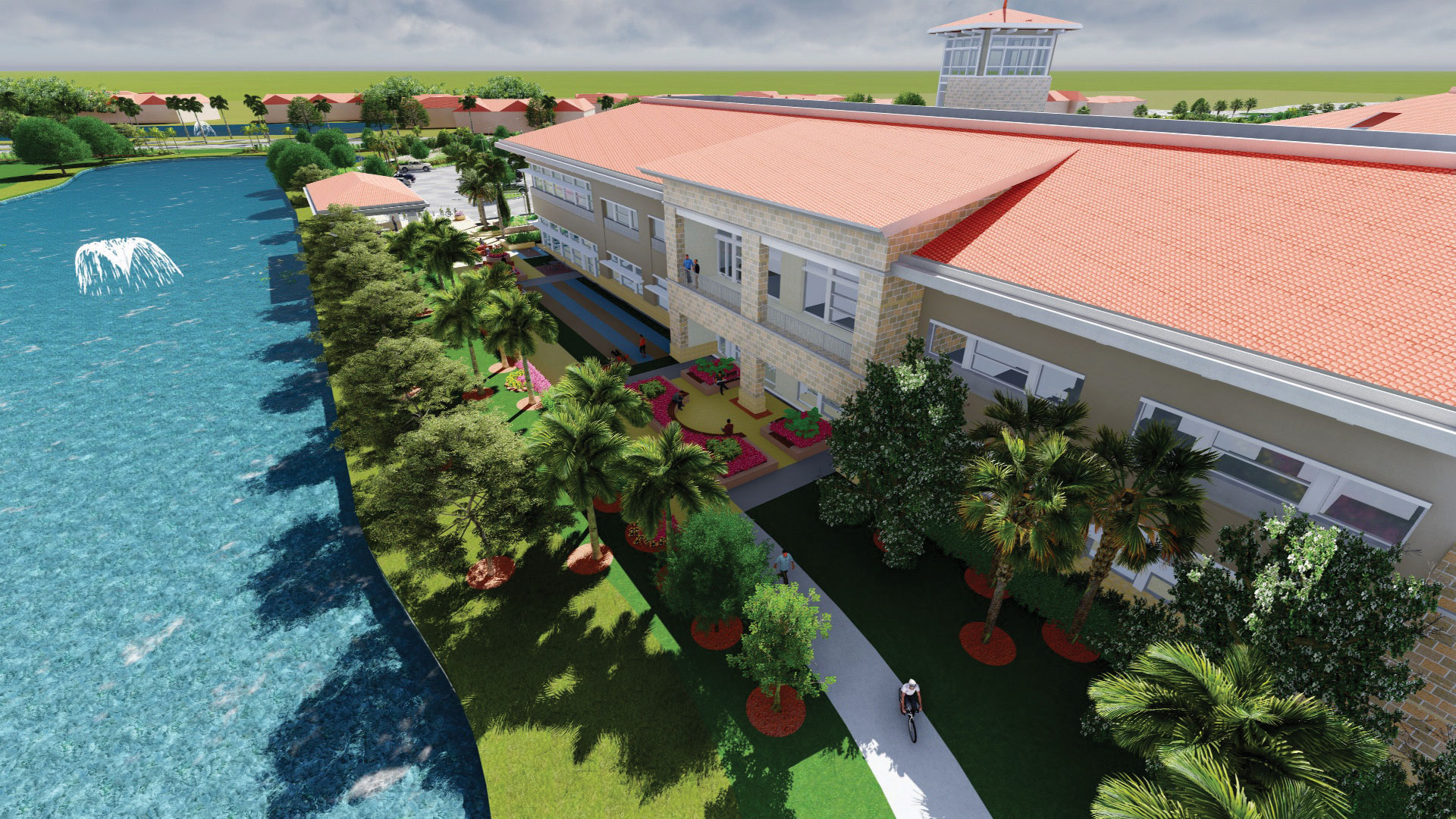 These developments, which represent a shift in health care toward preventive medicine, can encompass many buildings over many acres, some of which are owned or operated by wholly separate organizations offering health-related products and services. Moreover, each village needs to operate according to its own internal logic while seamlessly meshing with its surrounding community.

It has aspects in common with hospital planning but is more akin to urban planning.

Calling a planned development a health village won’t imbue it with the qualities that define one and its eventual design won’t fit any template. Too much about health village planning is unique to each project’s owners and operators as well as the specific site and the community in which it sits. But common considerations include:

1. Area of focus. The single biggest determinant of the shape and scope of a health village will be the development’s primary approach to preventive health and wellness. Most health villages will seek to group ambulatory outpatient services together, such as a lab, pharmacy, diagnostics, physical therapy and primary doctor’s offices.

Typically, these will include two areas for which there is a lot of demand: orthopedic rehab and cardiac care. However, other questions remain.

For instance, planners must ask if the larger strategy will be more clinical, cosmetic or holistic. They also must determine if locations within the broader development target pediatrics, weight gain, pain management or behavioral health. They also must decide whether it will offer spa services, massage, chiropractic or acupuncture. Whether the development will center on long-term care is another important question.

The answers to these questions will have a profound impact on future decisions involving the site, placement of the development’s anchor building, locations of different services and more. Beyond that, the answers will help to provide a rationale for the development in the first place as well as help to reinforce the health care provider’s own mission statement.

2. Community needs. Every community’s needs are different. Market demand in warm, sunny regions with lots of Medicare-eligible retirees will be different from demand in dense urban areas full of millennials.

Needs assessments performed early in the process can tell providers how to fill the gaps. Another information source can be data gathered on local demographics and current health metrics — primarily clinic volumes and types of visits. However, there’s no substitute for community engagement by health care administrators through discussions and educational sessions about the need for a proactive approach to wellness. Moreover, the development of relationships with local physicians and other health care providers whose help will be needed down the road can't be overemphasized.

The village of Estero, Fla., offers an example of the benefits of early engagement as well as the political realities that can hinder even the best-laid plans. A small community with a rapidly growing senior population, Estero worked with a master-planning group to ensure that the sprawl associated with Fort Myers to the north and Naples to the south could be contained as the village grew. At the same time, the village identified a need for a hospital within its borders, entering into serious discussions with residents as well as with Fort Myers-based Lee Health, which had purchased a 31-acre parcel in Estero in 2005. Lee performed a preliminary master plan and applied for a Certificate of Need (CON) in 2013, intending to build a hospital on the site and transfer 80 licensed beds from one of its Fort Myers facilities to the proposed Estero facility.

When the CON was denied after a rival system objected, Lee Health and Estero embarked on a health village plan, but not without consideration of how to begin meeting the community’s needs in the short term. As a key move in the process, Lee opened the Healthy Life Center at Coconut Point, an information and health education services storefront in a shopping center located just north of its 31-acre parcel of land. The satellite facility, which provides free health guidance, services and education that support healthier lifestyles and helps Estero residents to connect to physicians and health services, has served as an important bridge to the future health village, where it will move when Phase 1 of the Lee Health Village at Coconut Point opens next year. System leadership and the design team held various open forums to bring information to community members about both the Healthy Life Center and the health village that would succeed it. 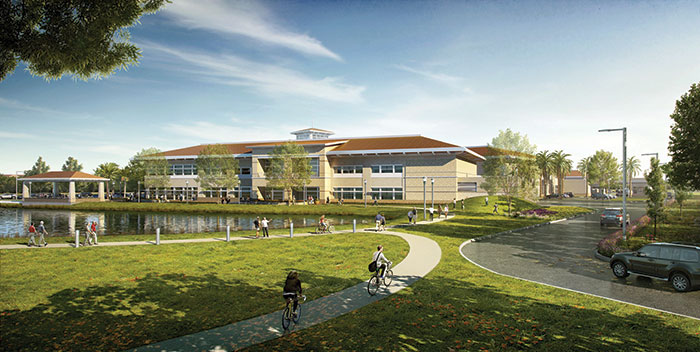 “We’ve had a lot of conversations with individual community members, community groups and civic organizations, where we’ve talked about the kinds of services they’re looking for,” says Suzanne Bradach, Lee Health’s director of special projects. “There are some things we haven’t included in our program because of lack of space, such as a wellness center, but we’ve accounted for all medically related programs. We’ve been careful to make sure we’re aligned with the community’s wants and needs.”

3. The site. No planner would expect even a small site to be perfectly flat, with perfect bedrock, soils and drainage, and no obstructions, let alone parcels of the size that can host a large development. Site topography (flat, sloping or steeply sloped) varies, as do site designations (brownfield or greenfield) and the immediate surroundings (urban, suburban or exurban). Additionally, designers will need to finesse the health care organization's many different ambitions for the site, such as accessibility and visibility, which likely will determine the location of the site’s anchor property and its adjacency to other facilities. Finally, planning authorities like city transit and the zoning commission will weigh in on rights of way and how much can be built and where.

Relationships with city leaders can be forged to keep the planning process on track. During early planning of the Estero site, the team worked closely with city officials, whose goal of a walkable, interconnected community required heavy coordination to ensure that the team’s vision blended with the city’s thoughtful and thorough existing master plan. Charrettes with the community’s leaders and master planners led to adjustments in the initial plan and the extension of roadways, walking paths and bike paths from the community to the various buildings that, over time, will be built there. Feedback and approval also were sought from the site’s neighbors through a half dozen presentations, leading to adjustments with regard to site aesthetics such as access, scale and signage.

4. Development strategy. A health system’s decision on whether to take a structured-phased or somewhat spontaneous approach is usually a matter of available funding streams, but opting for phased construction also can reflect uncertainty about the best way to proceed. Some health systems have cycled through health village prototypes, with each prototype featuring a different building as the development’s anchor, only to wind up favoring something that looks nothing like their master plan.

With phased projects, the best strategy often is the one with the most proven logic — begin with a nucleus of critical or convenient services, such as the ED, outpatient surgery center and clinics, which together meet the community’s most urgent needs, serve as a feeder to the eventual larger development and generate funds needed to finance the rest.

The arrangement of these components will have to meet initial functional requirements and anticipate future phases — the buildings, but also parking lots and, possibly, a central energy plant. Phase 1 of Estero’s health village commits higher up-front cost on an energy plant but utilizes lower-cost surface parking, to be replaced in future phases by parking structures fronted by retail space. 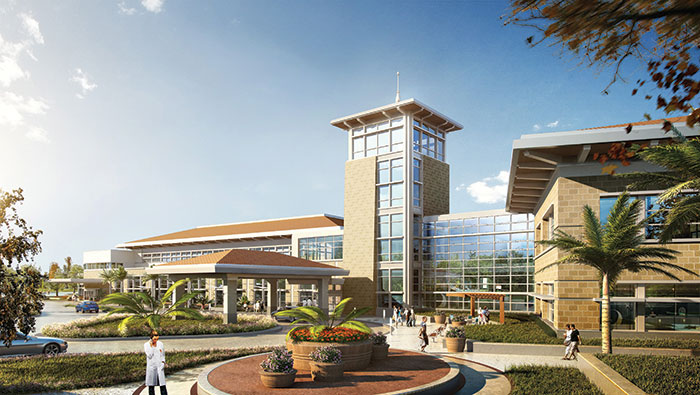 5. Management options. Retail developments with a medical office building as the anchor are a common enough sight, and the management of such a property involves a typically straightforward lease arrangement. A development funded, built and owned by a health system offers its owner many possible management paths, depending on its mission and philosophy. Most will want to take a hands-on approach so that the property preserves the vision that led to its initial development; on the other hand, few health systems want to be in the role of landlord, retail owner or restaurateur. And whatever decisions are made at the outset, changes within the administration can lead to an altered management strategy as time goes on.

Because a consistent management philosophy is beneficial during planning, it’s important to move slowly into potential partnerships. Some health systems are ready to shift the responsibility for management to a third party to help fill space and keep it filled as the development grows. When a third party is brought into the mix, it is vital that the planner get involved and perform due diligence to ensure that the health system’s vision of the health village is maintained.

Given all its variables, one might think health village planning would encounter snags from all sorts of directions. However, that likely won’t happen if a health care organization clearly establishes the project’s area of focus, engages with the community to determine its needs, builds relationships with city authorities who can help keep the project on track, approaches the site’s development with consistency and chooses partners wisely.

Cost is usually the biggest stumbling block for health villages that fail to come together. This shouldn’t be surprising to anyone who understands the narrow margins on which new developments are constructed. Because of the danger that a health village can end up as something that looks and functions like a retail strip development, it is essential that the health system planning it be strong-willed and focused, and maintain its discipline during implementation of its preferred plan.

For a health system that believes in the promise of a health village to extend the borders of the traditional medical campus and promote wellness in the community, the focus should be both on capital costs and on the value the facility will bring to the organization. Instead of cutting back on an architectural vocabulary that will make a health village evoke a sense of place, designers instead can conceive of a health village that is efficient in its operation, helping to reduce the overall cost of staffing the new facility.

In the end, whatever dollars are spent differentiating a health village from typical retail campuses will help to attract more of the community so that the health care organization can fulfill its mission to provide a comprehensive program aimed at helping residents to create and maintain a healthy lifestyle.