Mass General brings an analytical eye to its surveillance network

Massachusetts General Hospital recently implemented a system that not only simplified its security camera network, but improved it.

The 43 facilities (some contiguous) on the hospital’s 17-acre campus are monitored by 1,300 cameras recording 24/7. With more than 1,000 investigations to process each year, the hospital’s security team often was overwhelmed with footage to sift through.

To bring some much-needed efficiencies, the hospital decided to convert its security system to a digital platform. It deployed a software provided by Milestone Systems and embedded an analytics component from BriefCam within the software.

Using those analytics, the hospital has been able to observe trends and deploy resources where needed. Its new system shows video metadata in graphic visualization format, such as bar graphs and pie charts. The hospital’s security team says it is able to reduce the time and effort needed to conduct video reviews, post-event video investigation and real-time video monitoring.

“In the past, there might have been things that would have been a ‘nice to do,’ but we couldn’t do it because we didn’t have resources to watch many hours of video,” says Bonnie Michelman, Mass General's director of police,security and outside services and security consultant for Partners Healthcare Inc. “Now we can manage the content and we can see trends which, in turn, can drive redeployment of resources and, by extension, facilitate a better investigative focus and success.” 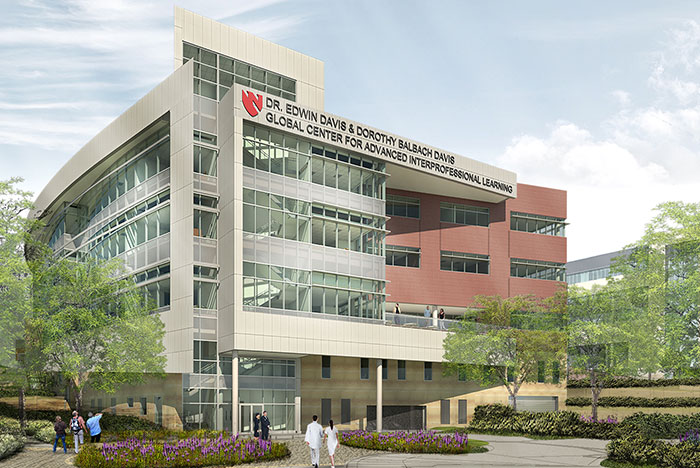 The Davis Global Center will feature a number of 3-D, virtual reality and holographic technologies used for simulation training.

The Davis Global Center will focus on helping students to develop clinical and surgical skills training in realistic simulated care environments using a combination of simulation technologies, virtual immersive reality, augmented reality and holographic technologies. Some of its highlights include the iEXCEL Helix — a 280-degree curved screen that creates 2-D and 3-D immersive environments, a laser-based 3-D iSpace featuring a five-sided virtual immersive reality setting, and a 130-seat holographic theater. 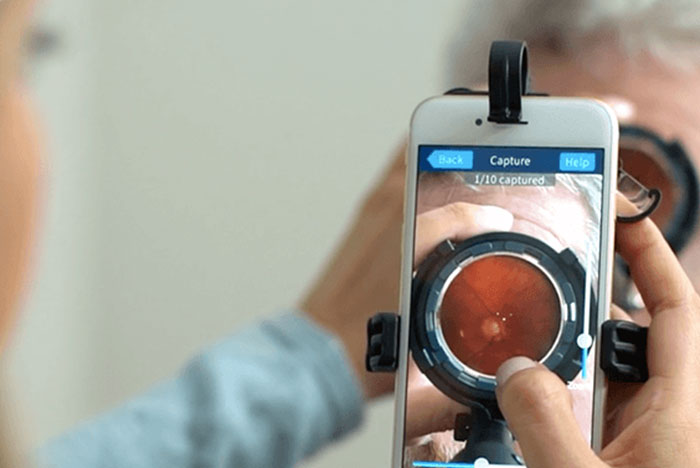 Banner Health is using a unique telehealth system to diagnose eye injuries in its emergency room.

Banner Health recently launched a teleophthalmology program in 13 of its Arizona facilities. The health care system is using a program developed by DigiSight Technologies Inc. that allows emergency department doctors to capture the image of a serious eye injury or other vision disorder, and digitally transfer that image for review to EyeNet, a Phoenix-based group of ophthalmology experts, in real time.

The technology uses a specialized adapter (FDA Class II registered) that takes pictures of the front of the eye and retina using a smartphone, and includes cloud and mobile-phone based HIPAA-compliant software to allow secure transmission of various vision and ocular tests.

"Sight is one of life's precious gifts, and it can be seriously impaired or stolen from us due to trauma or disease," says Pravin Dugel, M.D., physician executive director at Banner–University Medical Center Phoenix Eye Institute, and managing partner at Retinal Consultants of Arizona, also based in Phoenix. "Emergency rooms are very good at treating and stabilizing many serious health issues but, unfortunately, they are not equipped with imaging equipment nor ophthalmology expertise to quickly assess sight-threatening conditions."

Advanced technology ensures that no patient is left behind.