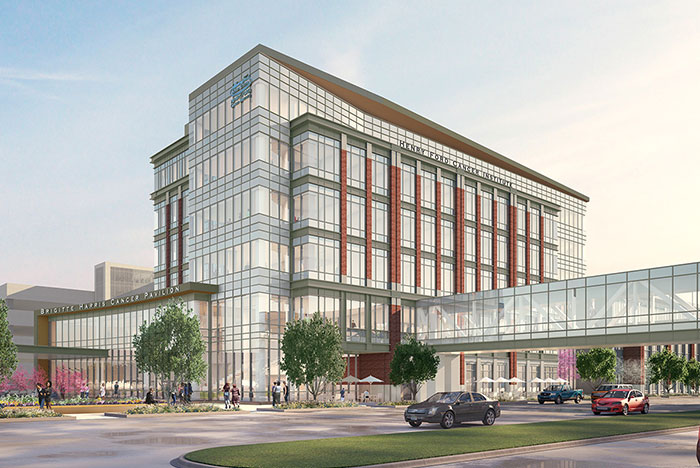 The Brigitte Harris Cancer Pavilion is designed with a glass exterior on the east and west sides of the building to allow natural light to flood into the interior.

The 187,000-square-foot Brigitte Harris Cancer Pavilion is part of a 300-acre expansion and neighborhood redevelopment initiative in the Detroit neighborhoods of New Center and Midtown. Planned development for the initiative includes a mix of office space, retail and housing. The cancer pavilion’s location will allow easier access to high-quality care for the area’s patients.

“Cancer is no stranger, but, no friend to Detroit,” says Mary Sheffield, District 5 city council member. “Henry Ford’s new cancer facility will relieve some of the financial, physical and emotional stress patients and their loved ones otherwise would experience traveling to other parts of the country for the care they need.”

The new eight-story facility will be connected to Henry Ford Hospital via skywalk to make it easier for patients to travel between the two facilities. It also will accommodate patients who want to limit travel by offering telemedicine and virtual tumor boards.

The facility is being designed by SmithGroupJJR, which has created a vision of brick, metal and limestone exterior flanked by six stories of glass on the east and west sides of the building, allowing natural light to penetrate its interior. A third-floor garden terrace with ample shade is planned for the third floor. 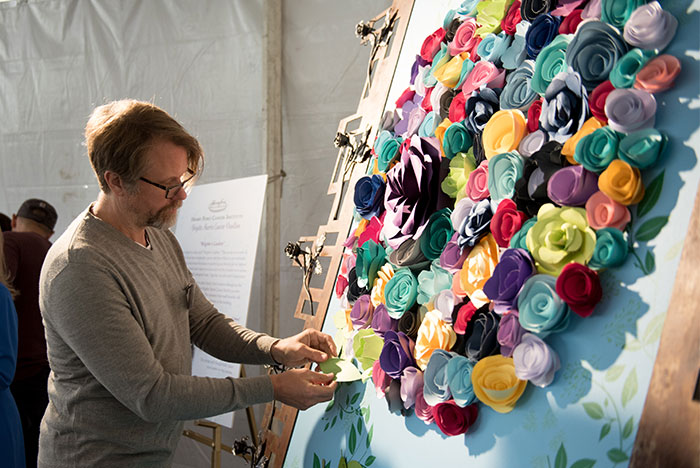 Detroit-based artist Erik Nordin places leaves on an art installation to remember cancer victims. The piece will reside permanently inside the Brigitte Harris Cancer Pavilion when the facility is completed in 2020.

The $155 million project is being managed by Turner Construction Co., which estimates that the project will create approximately 300 construction jobs.

The cancer center is named for Brigitte Harris, the late wife of Detroit businessman and philanthropist Mort Harris who donated $20 million to help bring the project to fruition. Brigitte Harris battled pancreatic cancer for nearly two years before dying in 2016.

The Harris family also donated a rose bush from Brigitte Harris’ garden, that will reside at the pavilion. At the facility’s groundbreaking, family members of cancer victims helped to create an artwork installation called “Brigitte’s Garden” by writing the names of their loved ones on personalized leaves. Artists installed the leaves on a special canvas of specially designed rose blossoms. The artwork will travel to other locations so that other cancer survivors and families can participate. The final piece will reside as a permanent art installation at the Brigitte Harris Cancer Pavilion, which is scheduled to open in 2020.

“We’ve long envisioned creating a world-class cancer destination with a coordinated, unified environment, and we’re so proud to make this vision a reality,” says John Popovich Jr., M.D., president and CEO of Henry Ford Hospital. “This building is the first of many announcements for our campus expansion, and we are excited to build on that momentum.”