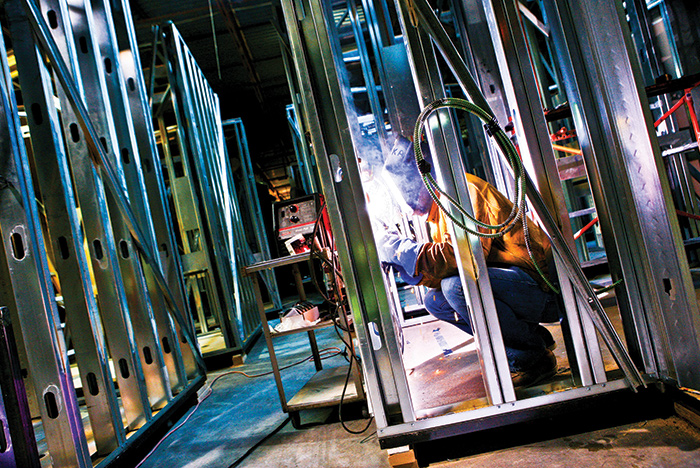 The expanded use of prefabrication is key to keeping hospitals and other health facility projects built on time and cost effectively.

A shortage of skilled labor is challenging the construction industry, and the health care facilities sector is among those feeling the effects.

In fact, because health care facilities are more complex and demanding to build than other structures, the demand for skilled tradespeople is even more acute, says Andrew Quirk, senior vice president and national director, Healthcare Center of Excellence, Skanska USA.

The industry reached this stage after the Great Recession eliminated more than 2 million construction jobs over a five-year period. Weary of the roller-coaster ride of construction, an estimated 60 percent of those positions have not returned.

But thanks to an evolution in how health care facilities are built and a willingness to search and find skilled labor when necessary, construction in the sector continues to forge ahead, builders say.

After a peak of nearly $30 billion in health care construction starts in 2008, the market dropped to a recent low of about $22 billion in 2013, according to Dodge Data & Analytics Inc. It has mostly trended upward since then to $24.3 billion in construction in 2017 and is projected to reach about $26.2 billion in 2018, a Dodge official says.;

The amounts include construction, additions and alterations of hospitals, nursing and convalescent homes, and clinics and medical office buildings.

The expanded use of prefabrication is key to keeping hospitals and other health facility projects built on time and cost effectively. With their repetitive design, hospitals are ideal for off-site manufacturing of bathroom pods, headwalls, mechanical-electrical-plumbing systems and risers, and even patient rooms, says Quirk.

In addition to reducing labor needs, prefabrication increases speed of delivery, which enables health systems to open and start offering care and generating revenue sooner. Product quality and worker safety are improved with it, too.

Turner Construction Co., which does about $2.5 billion in health care facility work annually, is under the same pressures as other companies to build quickly and cost effectively, says Randy Keiser, vice president and national health care director. To meet the demands, Turner utilizes prefabrication for jobs ranging from installing door hardware to building racks for duct piping installed in ceilings, Keiser says. It is becoming so prevalent that hospitals are being designed to accommodate manufactured bathroom pods, precast exteriors and other structural elements, he notes.

Though it’s been extremely helpful, manufactured construction is not a panacea for the industry. Ryan Van Dyke, project superintendent, Robins & Morton, Port St. Lucie, Fla., says a burst in health care and all construction throughout Florida has made finding skilled tradespeople an ongoing challenge. The company utilizes labor brokers to find qualified workers, who frequently are required to work long hours and are earning higher pay than in the past, which can drive up project costs. “You’re doing more with less,” Van Dyke says.

Doug Mangers, vice president of operations, McCarthy Building Cos. health care group, says prefabrication and the best planning can’t always prepare a builder for a sudden change in a project. He cites a case in which for competitive reasons a hospital owner suddenly wanted to ramp up completion of a project, putting the builder in a position of finding additional labor on extremely short notice.

For that reason, the industry is working at reversing the skilled labor shortage. Rory DeJohn, senior vice president, Turner, testified before the Senate Committee on Commerce, Science and Transportation in March regarding the dire need for schools and trades groups to offer training for young persons and veterans in construction and engineering.

Reaching out to women also has become more common. In June, Miron Construction Co., Neenah, Wis., held its second annual Build Like a Girl event to showcase opportunities in construction. Some 40 girls in seventh through 10th grades participated in hands-on construction activities.

Health care facilities prepare for the next return to work wave

Two health care facilities leaders weigh in on best practices for organizations welcoming staff back into the physical environment.