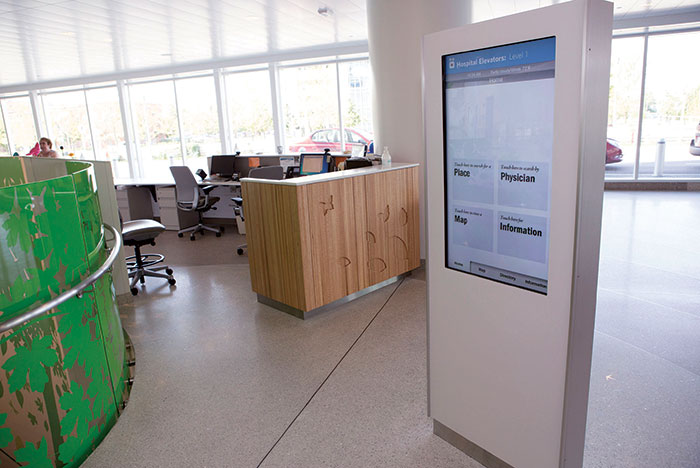 Managers can help to identify installation locations and work with designers to assure that signage integrates with facility aesthetics.

A digital signage system is not merely a few signs randomly positioned in a space. It is a powerful tool that provides an organization with the ability to purposefully reach varied audiences with relevant, up-to-date messaging.

Such a tool demands a budget to support the many aspects of a digital signage system, a dedicated multidisciplinary team to guide and operate it, focused installation efforts as well as measurable success indicators.

There are many digital signage vendors with a variety of different hardware and software systems at different price points. Before an investment is made and a vendor package is selected, key concepts must be considered to ensure a successful system.

To begin establishing a budget for a digital signage system, health facilities professionals must explore the areas of expense related to maintaining such a system. This can be accomplished by talking to industry experts, interviewing vendors or reaching out to counterparts who are currently managing their own digital signage system.

Funding can be owned by a variety of departments, each maintaining its piece of the whole, or one department can oversee the entire budget for a digital signage system. 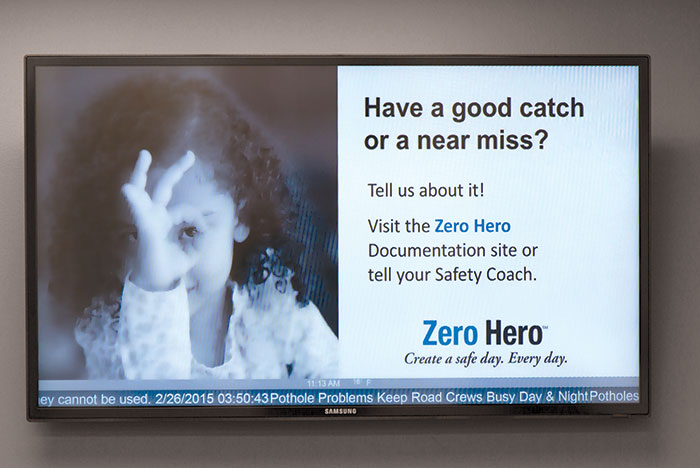 In the case of Nationwide Children’s, it meant a reduction in visual clutter, a streamlined communication to various audiences and cost-effective solutions instead of paper and labor.

From there, the hospital brought in vendors to learn about options and cost implications. In the end, how software interfaced with existing information systems as well as the user experience and scalability led to a good fit. Being able to propose a cost-effective solution that was forward thinking and sustainable convinced senior leaders to approve funding.

It is essential to assemble a multidisciplinary team of specialists to handle the different functional aspects of the system. Four key players for this team include the following:

Establishing an organizational leader to be the owner of the system provides a central point of communication for all of the team members. Building a digital signage system in phases, or starting with a few key installations, allows the team to establish a working rhythm and a healthy rapport before launching a widespread system rollout. Scheduled regular team meetings to review current projects, troubleshooting and expansion plans ensure that the system remains well-oiled and thrives. 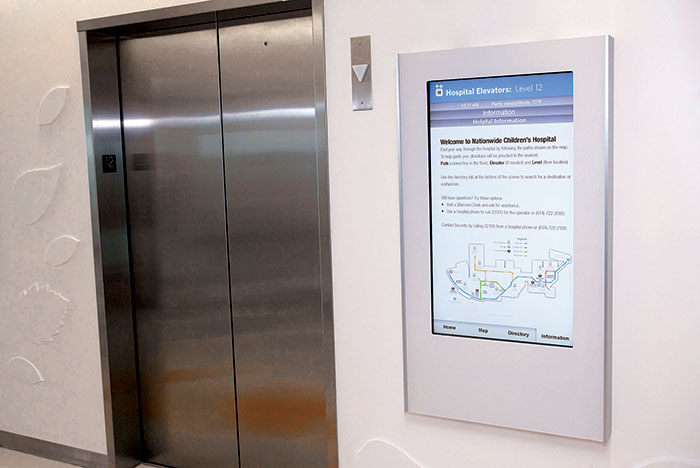 Purposeful placement in natural pause-point areas such as near elevators will increase the impact of digital signage.

Thoughtful planning of a digital signage system will make it a seamless part of an organization’s interior design and wayfinding system. Purposeful placement in easily accessible locations, or natural pause points, will increase user interactions or ensure a strong visual appeal for the greatest impact.

A digital signage installation’s impact is relative to the space it’s in. Think of a billboard — these can be easy to ignore in a crowded urban landscape, but they can smack you in the face when there is nothing else to look at while you are driving on the highway. Another example is the presence of digital signage up and down the Las Vegas strip or in the middle of Times Square. With so much visual pollution, the digital signs assault your eyes, and individual installations are hardly noticed until you are on top of the display.

So, while bigger is better for the most part, the built environment will play a role in determining the full impact. After all, small signs can be just as impactful. Elevator signs or restroom signs are incredibly effective at eye level when there are no competing interest points.

No matter the size of the digital display, the impact also is significantly determined by the quality of the content. If it’s a massive, multistory outdoor display but the content is bland and lacking in motion, scale or intrigue, then size doesn’t matter. In fact, it can be argued that content is more important than size. Good content on an Apple watch easily can be more impactful than a billboard. Digital signage installations that were not thoughtfully positioned and aren’t very large and eye-catching still can have an impact when viewers zero in on robust content and follow through on the call to action.

Regardless of the space or content, installing a digital monitor or monitors may only require a power source and hardwire or wireless data connections, but finishing details can make all the difference in the sophistication of an installation. A shroud encasement or architectural housing easily can improve the overall look. Choosing a shroud or encasement should be as intentional as the message displayed on the digital sign.

When choosing a content management system or platform, considerations include the following:

Often, there isn’t any one system that is the best. Different options are designed with different target markets in mind and, therefore, have different strengths and weaknesses. A management system that has the most functionality also will be the most complex and difficult to learn.

Then the hardware aspect must be considered. A lot of options are off the table just by virtue of the information services department being dedicated to personal computers or Linux boxes. So, choosing a system is all about the right fit for the particular system and its planned use.

A hallmark of a content management tool is ease of use for the system owner or operator. For example, a system that is easy to use might offer the ability to build a playlist of messages, with each message having its own go-live date and time as well as end date and time that can be loaded to various digital signs through a library system.

In addition, providing remote access for different user groups with a variety of permission levels allows for a variety of content contributors.

For instance, an organization-branded framework can be maintained across multiple users where they can input their own content using a series of branded templates. In multiple-user scenarios, reviewing and approving permission levels as well as activating alert functions can make all the difference when seeking to avoid unauthorized content from being displayed.

Housed on a central server with its own firewall system and antiviral protections, the system can be isolated from other corporate information technology functions.

As the network of signs grows over time, the ability to reinvent and tweak the back-end framework and organization of the digital signs is invaluable. With each framework change, work toward increased ease of use and organization — two things that are incredibly important as the network increases in size. A system that can grow and expand easily can make all the difference. 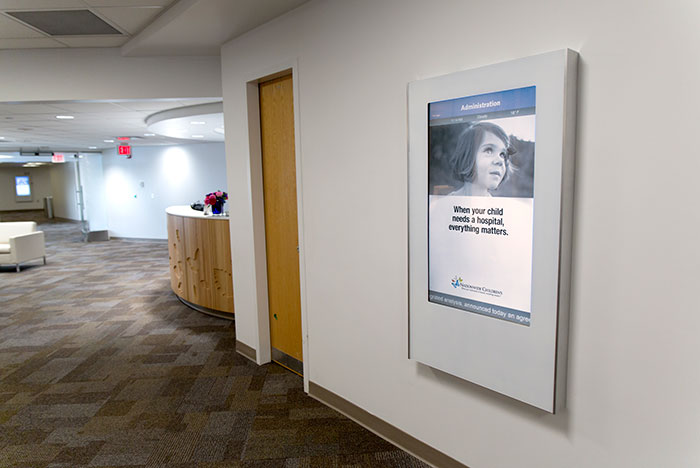 The best digital signage systems are most successful when eye-catching content is kept up-to-date.

After it goes live, a digital signage system will not be successful without regular content and maintenance. The best digital signage systems — no matter the monitors, the hardware, the software powering it or the team running it — are only as strong as the content displayed and the impact on the audience. Viewers will lose interest quickly in digital signs that don’t continue to be eye-catching. Keeping content fresh and relevant — either by adding new content or refreshing messaging — keeps the intended audience’s attention once the shiny newness has worn off, and prevents the system from becoming part of the backdrop.

Likewise, without regular attention to the system’s technical aspects, it can all come crashing down. Power glitches alone can wreak havoc on a digital signage system, not to mention the need for routine cleaning, both inside and outside. Having dedicated support to provide regular hands-on touches to the individual monitors keeps the system healthy. Like any other piece of equipment or asset, digital signs function best when cleaned and maintained.

On Nationwide Children’s main campus, there is an interactive digital sign that supports a donor recognition art installation. Users can look up their names and learn exactly where they appear within the art installation without having to scan the length of the display.

Whether it was due to overuse or a glitch in the system, this digital sign locked up and defaulted to a blue desktop. Unfortunately, in its defaulted state, visitors were still able to engage with the digital sign, specifically its web browser to view all sorts of web-based content. This is not the desired outcome from a digital sign.

To combat maintenance issues and glitches, facilities professionals should build an alert system that goes off when things go down. Deciding who responds to the alerts and how to manage them is time well spent and can smooth the day-to-day management of the system. Vendors offer yearly maintenance packages to ensure that all working parts function correctly. This can be particularly valuable in the event of an upgrade or system failure.

Once a digital signage system is installed, health care organizations are desperate for feedback and impact results. The best way to get that information may be in-person, follow-up surveys with the audience.

On a grassroots level, facilities staff can stand in the general areas where digital signage is visible and ask passersby about information that they might have been exposed to through the digital signage. Another way to measure could be to promote a reward for a completed survey or as a measurable action taken.

After a system is established, the organization can get creative in measuring impact. For instance, a strong and steady increase in the number of content requests for the digital signage channels may point toward the digital signage becoming a predictable and trusted communication channel. Beyond requests for content, positive user feedback is a notable sign of adoption and success.

At Nationwide Children’s Hospital, staff removed a portion of the content from interactive digital signs that is meant to help patients and families find their way around the hospital campus. Normally, removing information that could be deemed helpful wouldn’t be advisable. However, the analytics generated from these signs identified that few, if any, people were accessing it and keeping it up-to-date was labor intensive.

After its initial pilot, Nationwide Children’s rolled out a large installation that coincided with the opening of a new patient tower. As staff were in the new building for training and orientation, they would see the large-scale monitors installed in break rooms and in family areas.

Once the switch was flipped and the digital signage system was live and operational, staff were initially disappointed because they thought TVs had been installed in their break rooms.

After they became familiar with how the system could work for them, however, staff grew to love the digital signage system. Requests to get additional digital signs installed and ideas for content to feature on the system regularly pour in.

Kim Dwyer is manager of internal communications within the marketing and public relations department at Nationwide Children’s Hospital, Columbus, Ohio. She can be reached at Kimberly.Dwyer@nationwidechildrens.org. She wrote this article based on research and notes supplied by Alisa Pinciotti, senior interior designer at the hospital.

Making up for tight budgets and reduced staffing