Plus, Joint Commission updates the field on recent survey, methods and standard changes 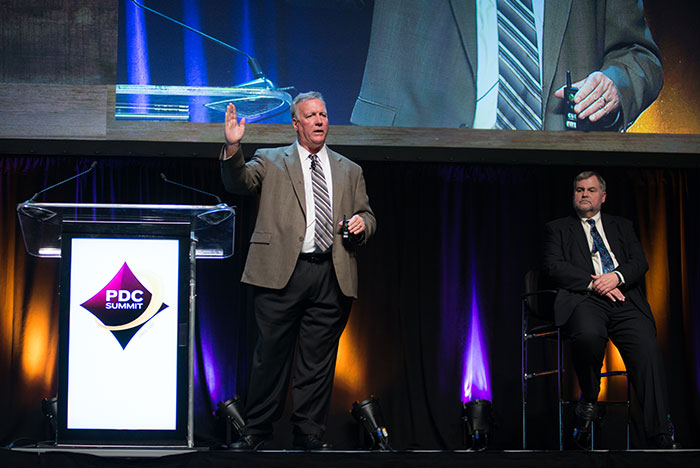 Joe Powell, executive director of the Healthcare Infrastructure Research Institute, led a panel discussion Tuesday on leading health care innovation projects and research at the International Summit & Exhibition on Planning, Design & Construction. The 16 innovations touched upon ranged from resiliency and modular construction to virtual care delivery and the impact of analytics on outpatient design.

Five leaders in health care facility management participated in the panel and each chose the innovations they felt would have the biggest positive impact on the state of health care infrastructure if adopted on a large scale.

Stella Fiotes, executive director, construction and facilities management, Department of Veterans Affairs (VA), also emphasized the need for integrated teams to achieve project success and drove home the point that health care organizations should build those teams based on the individuals, not just the company.

Another innovation Fiotes touched on was NBBJ Architects’ health care resiliency in the era of climate change research. Fiotes explained that the VA’s commitment to serving veterans wherever they are even if it’s in a disaster-prone area means that it has had to adopt a number of resilient design strategies, such as implementing the upside-down design at its New Orleans hospital so that critical functions are placed on higher floors out of reach of flooding.

Walter Jones, senior vice president, campus transformation, The MetroHealth System, and Brian Weldy, vice president, FacilitiGroup Infrastructure, HCA, both discussed virtual care’s impact on facility planning. Jones said that virtual care represents a “large shift on how to discuss health care in the future” and that it can help to answer the question of how to keep large populations healthy in the age of mobility.

Those in the audience voted on which innovations would have the most positive impact if adopted on a large scale. Nontraditional means of delivering health care and health care resiliency in the era of climate change received the most votes.

Monroe began the session by breaking down the three components of the Joint Commission: Division of Standards and Survey Methods (DSSM), Accreditation and Certification Operations (ACO), and Standards Interpretation Group (SIG). He likened the three components to the federal government with DSSM representing the legislative branch to develop standards; the ACO group acting as the executive branch with surveyors ensuring the standards are followed; and SIG acting as the judicial branch to interpret and clarify those standards when conflicts arise. Monroe described SIG as the Joint Commission’s “customer service arm.”

The rest of the session focused on the most commonly cited standards among health care built environments. Monroe and Kendig also explained the SAFER Matrix and how specific locations (critical care units vs. hospital lobby) can impact the level at which citations are recorded.

The session was also filled with specific advice for commonly cited standards, such as designing storage spaces to help eliminate corridor clutter like food carts left in hospital hallways for long periods of time.

“It’s important to think ahead and find places for these things and design them into the building accordingly,” Monroe said. “These are things that can be avoided through good design and good planning.”

Educational sessions and trade show help facility professionals to prepare for the future.

Students take on design and construction challenge at PDC Summit

Architecture, engineering, construction and nursing students collaborate to create a neighborhood hospital concept for one of Nashville's up-and-coming areas.