Prefabrication means building or manufacturing parts of a project at a location other than the job site. Prefabrication provides many advantages over in situ construction, regardless of the specific execution strategy.

She adds, “It’s not magic; it’s just education.” If architects can teach the design industry to manufacture, it can take advantage of significant productivity gains, while increasing quality and enhancing design outcomes. 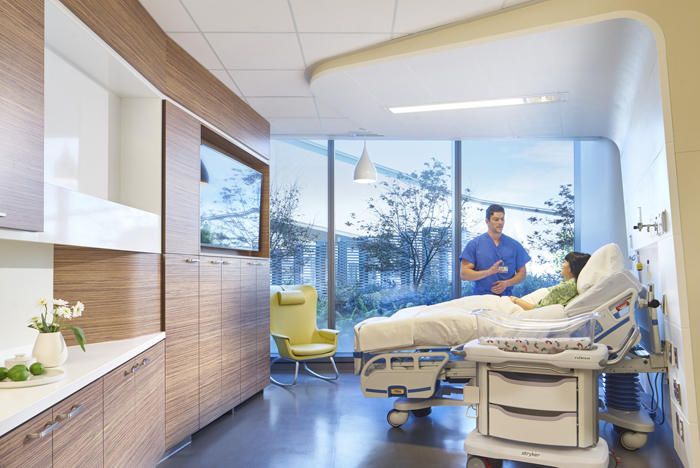 Site impact: Moving work off-site reduces the competition between trades for space and time, helping to expedite the construction schedule. It also enables a cleaner job site, both by having less dirty work occur on-site, and by reducing the time materials occupy space at the job. If the prefab shop is not proximal to the job site, the amount of parking needed for workers in the vicinity of construction is reduced, which can be a relief for existing hospitals that must continue to operate.

Safety: The manufacturing process in an off-site location can be set up so that workers are standing at floor level instead of working above their heads on ladders, increasing job safety. Equipment to assist in moving items can be built into the process. Lighting can be optimized, in lieu of temporary construction lighting, also enhancing worker safety.

Quality control: Prefab construction/assembly normally occurs in a shop in which the environment is controlled and work is not affected by the weather. Elements stay cleaner and are not as vulnerable to damage by other tradespeople. Prefabrication also can reduce the amount of rework and punch list items.

Improved design: More innovative design may result from earlier attention to design and looking at processes more creatively and collaboratively. For example, a distribution rack structure could be designed to also support a patient lift if it’s considered early enough in the process.

Speed to market: Many prefabricated elements can be created in parallel with the rest of construction, rather than in sequence. When the site is ready to accept an element, the element is ready to be installed, instead of waiting for it to be created on-site.

Reduction of waste: Calculation of materials can be much more precise with prefabrication, reducing the amount of material purchased as well as waste thrown into landfills. Labor waste is also reduced by cutting down on the amount of walking on-site to find tools, for example.

Cost control: While one cannot say categorically that every use of prefabrication will reduce construction costs, it is typical that owners and the design/construction team will have a greater certainty of their cost exposure for the parts of a project that are prefabricated because of the early and precise definition of the product.

Reduction in labor: In a tight labor market, projects can be executed with fewer construction workers. In addition, factory labor rates are typically lower than construction labor rates.

Collaboration: Trends in design and construction have been demonstrating the advantages of increased collaboration of all parties. Prefabrication enhances the opportunities for teamwork that benefit all parties.

According to Marks, there are three basic execution strategies for prefabrication:

Off-site construction: This uses a temporary facility adjacent to the project to construct significant elements that may be too large to transport long distances or for which an established contractor’s shop is not available or suitable. Off-site construction also may apply in instances when local content is required. This approach is less common in health care projects than in industrial projects that require complex, high-value elements. Another example of off-site construction would be for a civil engineering project such as a pedestrian bridge built over an active roadway, in which the bridge can be constructed next to the site and then moved into place to reduce the time the roadway is shut down.

Supply chain-led, off-site construction: This uses a subcontractor’s facility to enable the assembly of single or multitrade elements, such as mechanical-electrical-plumbing (MEP) distribution racks, or other items that could be prefabricated but are not available to purchase through the supply chain.

Off-site manufacturing: This entails purchasing a manufactured item and installing it on-site. Examples include patient room headwalls, bathroom pods and operating room ceilings that are made in a factory, shipped to the site, installed as a unit into the structure and connected to building services. The ultimate design of the element may not appear to differ substantially from a conventionally built item, but the site must be designed for the element to fit, and construction means and methods need to be set up for the element to be received on the site and installed as a piece. This strategy needs to be set up during design and prior to bidding and construction. For example, patient headwalls can be manufactured as inserts that are installed into a “stick-built” parent wall on-site, or they can be manufactured to be the entire wall. Either approach is legitimate, but the decision needs to be made during the design process to determine the scope of work for each trade and to bring the headwall manufacturer into the process early.

Prefabricated bathroom pods are fairly common in health care projects and there are numerous manufacturers making them. They are ideal to prefabricate because they are repetitive, relatively small and easy to ship, and each wall has an intensity of items on it so one is not just shipping a lot of blank walls. As Chris Giattina of BLOX, a design-manufacture-construct company based in Bessemer, Ala., says, “The path toward complexity went through the bathroom.” Given this success, there is more interest in prefabricating entire exam rooms and even patient rooms.

The sophistication of prefab headwalls has advanced immensely. Using manufacturers that are successful at making headwalls gets the best value from an entity that has optimized quality and process, having invested in the production infrastructure. Buying a manufactured headwall does not limit design options because it can be customized in terms of utility quantities, locations and finishes. Medical gases can be certified before the headwalls are shipped to the site.

Prefabricated operating room ceilings provide a single-source, coordinated and integrated product, with all of the architectural and MEP features included. Built-in truss systems provide mounting locations for booms and imaging rails. Single-point connections for services are provided and access for maintenance activities is built into the system. Some manufacturers now offer the ability to prefabricate the entire room, including ceiling, walls and floors.

Additionally, prefabricated elevator and hoistway systems also can be purchased. The hoistway is built on its side in a factory, and then craned into place on-site in sections. The elements are all the same as in a stick-built system, but quality control and inspection are easier because it can be viewed horizontally in the manufacturing plant. It is also safer for workers, who don’t have to work from platforms within an open hoistway on the job site.

There is a tendency to think of industrial and commodity-type buildings when considering prefabricated structural systems, but the idea of prefabricating the structural system for a hospital should not be discounted. One system, for example, comprises a chassis of systemized components of columns, beams and connectors, like a full-scale Erector® set. All of the elements are manufactured off-site, with the connectors mounted to the columns. On-site, the beams are slipped into the connectors. This approach reduces the amount of on-site erection time needed. The dimensional accuracy is greater than that of site-built structural systems, providing a better framework for attaching other prefabricated or architectural elements, such as curtain walls, stairs and balconies.

In fact, curtain walls, too, are commonly prefabricated for hospital construction.

Despite its advantages, prefabrication is not used nearly as much as it could be in health care. For some elements, such as elevators and operating rooms, prefabrication has been less common. What are the barriers to increased use of prefabrication?

Prefab is easiest when the element is made by a single trade, where extensive collaboration is not needed. It’s much more challenging for multitrade elements and larger projects. Just figuring out whose job it is (i.e., designer, owner and builder) to lead the process can be a stumbling block. It could be just a lack of experience, not knowing how to do it or the fear of trying something new. It could also be because of unfamiliarity with the supply chain and how to obtain what is needed. Specific challenges include cost estimating, engaging with the supply chain, collaboration with multiple trades and creating relationships with new vendors. Early issues of getting approvals from the authority having jurisdiction have mostly subsided across the country, with most jurisdictions now accepting the use of prefabrication in hospitals.

Choosing what to prefabricate takes an effort to understand what is possible, to dissect the plan of the building and weigh the options. A project has to be planned from the beginning to incorporate prefabrication. It is critical to consider the interstitial space between the prefab element and the site construction.

Recent studies and articles have compared relative productivity changes in the architecture-engineering-construction (AEC) industry versus manufacturing. The general conclusions are that manufacturing efficiency has increased over the decades, while AEC productivity has been low or has decreased. This is not sustainable; the AEC industry needs to retool itself to stay viable. Fortunately, the rise of building information modeling in design and construction has been a boon in enabling the move toward delivery through manufacturing.

So, what steps can architects take to succeed at implementing prefabrication in health care design?

If architects can teach the design industry to manufacture, they can take advantage of significant productivity gains while increasing quality and enhancing design outcomes for hospital projects.