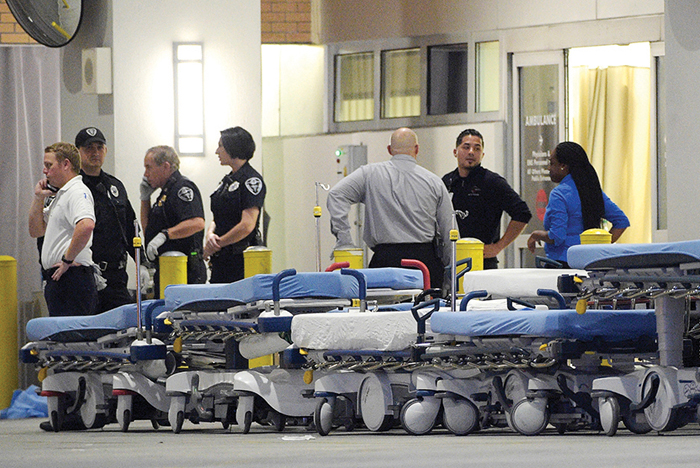 Emergency medical personnel wait with stretchers at the emergency entrance to Orlando (Fla.) Regional Medical Center for the arrival of patients from the scene of a fatal shooting at Pulse nightclub.

In Orlando, Fla., the victims came in waves. Shortly before 2 a.m. on June 12, 2016, a 29-year-old assailant opened fire on patrons at a Latin-themed night at Pulse nightclub. In the span of five minutes, the gunman unleashed more than 250 rounds of fury on approximately 300 club-goers, catapulting a community into crisis mode.

Almost immediately, two ambulances were on scene, and another arrived shortly thereafter. Within 10 minutes, police officers gained access to the club. They worked with members of the fire and emergency medical services (EMS) communities to begin transporting victims in waves via ambulances and police cruisers. By 4 a.m., law enforcement personnel had rescued all patrons and employees except those being held hostage. When the SWAT team entered the premises in an armored vehicle an hour later, killing the perpetrator, authorities were able to transfer the remaining occupants to Orlando Regional Medical Center (ORMC), part of Orlando Health.

The Orlando Health team learned of the horror unfolding nearby when the Orlando Fire Department notified them minutes after the first shot. ORMC quickly became the epicenter of Pulse nightclub patient care, with physicians from APH assisting the hospital’s staff. Within a span of three hours, 50 victims and hundreds of family members, friends and community leaders descended on the hospital that, along with APH, typically treats 5,000 trauma patients annually.

Initial reports indicated that 20 people were injured. Given the extent of the victims’ chest and abdomen injuries, the anticipated volume of patients and the hospital’s proximity to the scene, ORMC’s emergency department (ED) almost immediately went into lockdown. At one point, the madness heightened even further when it was reported that an active shooter was on-site; however, this ended up being a false report. Despite the situational chaos that morning, Orlando Health staff efficiently and effectively sized up the situation. ED and trauma surgery leaders summoned staff throughout the hospital, as well as off-duty doctors, nurses and other health care workers, to meet the mounting demands on their facility.

Given Orlando’s status as a tourism mecca and Florida’s propensity for powerful hurricanes and tornadoes, Orlando Health employees had been trained for years on large-scale incident response. In recent years, building and security personnel held monthly drills with staff, conducted joint efforts with other facilities in the Greater Orlando area and developed intake plans — all in anticipation of worse-case scenarios like the Pulse incident. The investment by Orlando Health to define rapid-response protocols and foster hands-on training paid life-saving dividends on June 12, but there were invaluable lessons learned, too.

“The Orange County EMS System and ORMC were prepared for a mass-casualty event because, unfortunately, our world requires us to be. In recent years, we had increased our level of training and regional collaboration, including drills specifically focused on mass shootings, to ensure optimal crisis care outcomes,” says Christopher Hunter, director of the Health Services Department and associate EMS medical director for Orange County, Florida, at the time of the Pulse massacre. “Our readiness was evident on June 12, but we would be remiss if we did not acknowledge gaps in our protocol. Looking back at the Pulse nightclub incident, I am proud of the way our team responded when the city of Orlando needed us most. I am equally encouraged that we recognized that we can do more to improve logistics and minimize loss.”

Hunter’s remarks are not unique; hospital, law enforcement, fire, EMS and facility authorities have uttered similar concerns in the aftermath of tragedies in Las Vegas, Boston, Parkland, Santa Fe and many other communities devastated by unnecessary bloodshed.

With documented success stories and opportunities for improvement in mind, the National Fire Protection Association (NFPA) set out to develop a standard for all health and safety practitioners outlining best strategies for protecting people and property when the unthinkable happens.

Released on May 1, the 48-page, NFPA 3000 document is the first of its kind, and has already been heralded by authorities around the globe. Primarily, the new standard establishes requirements for entire communities, including health care facility leaders, with four main components in mind: whole community, unified command, integrated response and planned recovery.

“The NFPA 3000 process, from start to finish, has been an exceptional example of emergency responders and other safety-focused practitioners swiftly coming together to provide invaluable perspectives and address a significant threat in our world,” says NFPA President and CEO Jim Pauley. “The proactive strategies recommended and defined in NFPA 3000 will go a long way in helping communities plan, respond and recover from active-shooter and hostile events.”

Two of the standard’s 20 chapters are highly relevant to health care leaders. One section of NFPA 3000 pertains to facility preparedness and best practices for handling a hostile event that may take place on-site at hospital facilities and medical campuses. A separate chapter addresses preparedness and response for out-of-hospital ASHER incidents for those facilities that have the capabilities to receive outside patients (i.e., EDs).

“While it is not expected that NFPA 3000 will be adopted by the Centers for Medicare & Medicaid Services (CMS), the standard could be adopted at local, regional or state levels,” Chad Beebe, deputy executive director for the American Society for Health Care Engineering (ASHE) of the American Hospital Association says. “Even if it is not adopted in a hospital’s jurisdiction, the standard outlines important elements that should be included in a facility’s emergency and security management programs.”

Long before a perpetrator strikes, health care building and security managers need to assess risks and identify best practices. As Orlando Health facility leaders can attest, there is a great deal to consider when creating, practicing and implementing ASHER program protocol. The ORMC team not only had to deal with patients, loved ones and authorities who flocked to their hospital following the Pulse shooting, they also had to contend with a potential active shooter in their facility. Having dozens of victims showing up in an ED and responding to a hostile event on-site present both similar concerns and unique challenges.

“Imagine managing the emergency room on the morning of the Pulse incident — receiving a massive number of critically injured patients with little warning, replenishing inventory, securing blood and helping staff gain access despite blocked streets and emergency-response restrictions in place,” says Hunter, who currently serves in several Orlando Health and Orange County EMS System leadership roles. “Then add the miscommunication that a shooter is now in the building. One minute, staff are assessing patients, administering care and relocating patients to surgery; the next they are scrambling for safety and blocking doors leading to patient care areas. To say it was a lot to digest and direct in an incredibly short time span would be an understatement.”

NFPA 3000’s facility preparedness chapter helps building and security managers consider all possibilities and solutions. It includes information on the ability to evacuate, relocate or secure occupants in place and handling threat-reaction procedures and training. Communication, reunification and notification — particular areas of concern raised during and after the Pulse nightclub massacre — are covered in this chapter. In the months after the Pulse incident, news outlets reported that families waited and waited as officials tried to identify the victims.

These delays prompt questions that hospital officials need to take to heart. Do you have a documented, well-vetted plan for communicating with key personnel on-site or off-site in a timely manner? Have you shared it with key players? How will you engage with emergency responders, building occupants and property abutters when you are thrust into crisis mode? What are your protocols and policies for sharing information with emergency management, responders and investigators? How and when will you speak to family members and the press? In terms of notification protocol, has your system been designed to work effectively with the building’s fire-alarm resources?

NFPA 3000 also underscores the need for bleeding control kits. Does your facility have enough bleeding control kits in stock? What do they include? Where are they located? Tourniquets, dressings and instructions on how to apply pressure can save lives, especially during mass-casualty events when it is highly possible for victims to bleed out within 10 minutes. NFPA 3000 encourages facility leaders to stock plenty of bleeding control kits in accessible spots (for example, co-located with public-access automated external defibrillators). Even in a hospital setting, with qualified clinical help all around, empowering the general public to stop the bleed could mean the difference between life and death.

The preparedness chapter calls for an emergency-action plan that includes evacuation, relocation and secure-in-place procedures. It prompts building security personnel to identify lockable spaces, exits to stairwells and outside space, and where and when doors will be locked, in accordance with NFPA 101, Life Safety Code®. Hospital emergency-action plans should be provided to the local authority having jurisdiction, and plans should be made to conduct mass casualty-event exercises together at least once annually.

“Receiving patients from a hostile event elsewhere in the community requires a different systematic, scalable approach, ASHE’s Beebe says. “In the chapter devoted to hospital preparedness and response for out-of-hospital ASHER incidents, leaders are charged with developing protocol that integrates with the plans established by the local response and emergency-
management community.” Plans should address spontaneous arrivals and patient distribution, and include two methods of communication with public-safety partners. Additionally, details on notification activation, whole community collaboration, and monthly testing to ensure functionality should be documented. Another key requirement is designating a staff person or team to manage patient distribution and emergency-response interaction following an ASHER event.

This chapter of NFPA 3000 recommends that victim identification practices be in sync with local partners’ prescribed practices and procedures. It also references the importance of facility access, lockdown, conducting a situational awareness assessment and defining protocol for weapons and device screening. To professionally and proactively manage incident response and subsequent reporting, NFPA 3000 calls for hospital command centers/hospital incident-command systems to be in place. Elements in NFPA 3000 will supplement and enhance a facility’s existing emergency-operation plan and mass-casualty plan that are built upon NFPA 99, Health Care Facility Code, specifically for ASHER incidents by ensuring integration into the overall community’s response plan.

Active-shooter and hostile events are increasing. To minimize risk and reduce loss, members of law enforcement, the fire service, EMS, facility management and the medical environment need to integrate before, during and after mass-casualty events.

NFPA 3000 provides guidance, based on real-world experiences and on-the-job perspective, to help hospital officials unify with other life-safety leaders to influence positive outcomes.

Lauren D’Angelo is a segment director for the National Fire Protection Association. She can be reached at ldangelo@nfpa.org.

Also this week: Study looks into association between disinfectant use and COPD.

At  Ochsner Medical Center in Jefferson, Louisiana, preplanning and communications were key to keeping facilities up and running.

Plus: Joint Commission and IAHSS also weigh in on strategies to reduce health care violence.