The benefits of co-locating design and construction teams 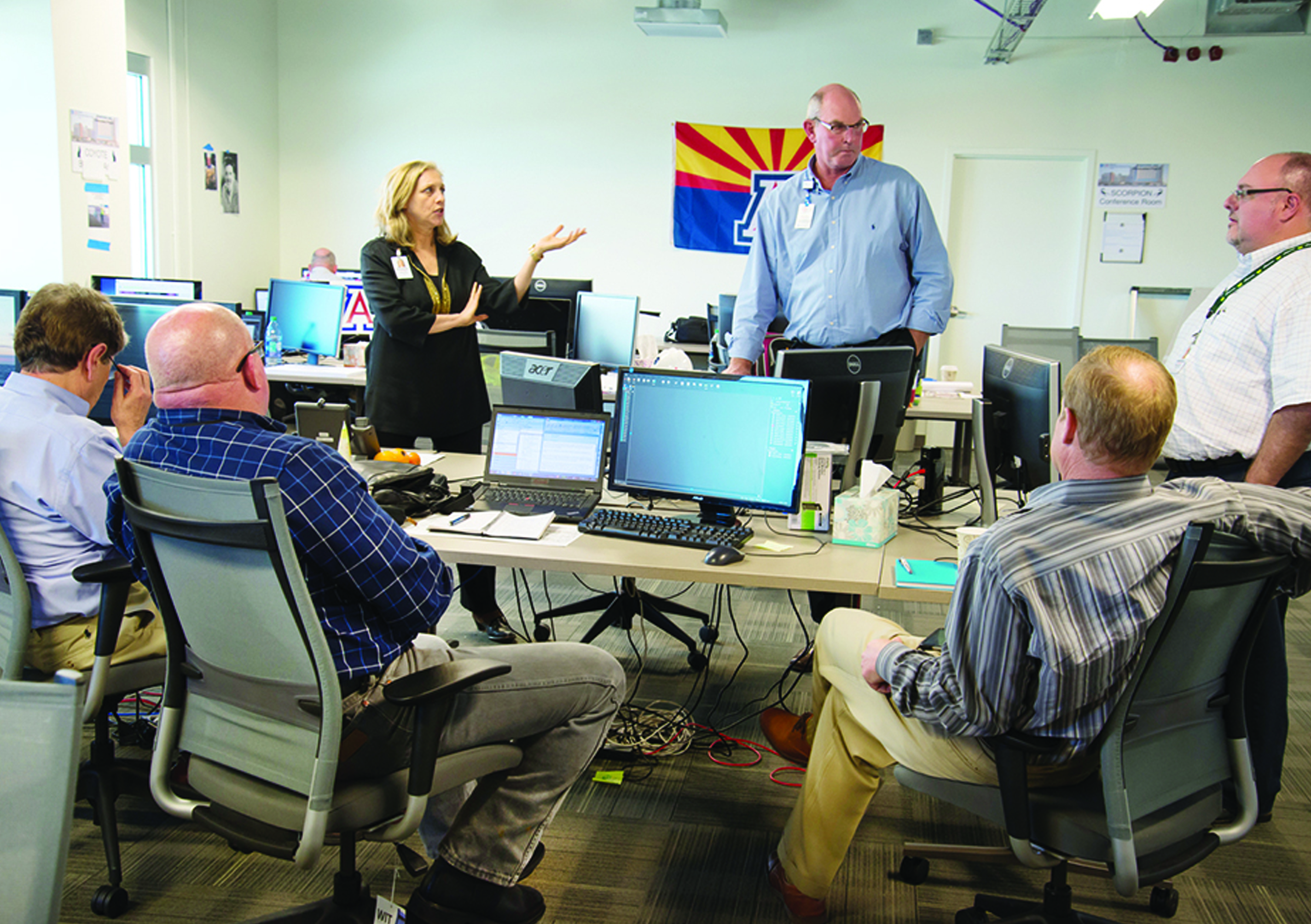 Flexible workspaces promoted impromptu conversations and collaboration throughout the course of the project.

As demand for faster, more efficient and progressive projects across renovations and new construction accelerates, the request for in-person, cross-team collaboration has followed suit.

Co-location holds the promise of significant savings in time, effort and financial resources, while enhancing the quality of the documents, construction process and finished building.

While simple in concept, the practice of design and construction teams working together from a central operations hub requires thoughtful consideration and coordination beyond that of traditional project delivery. 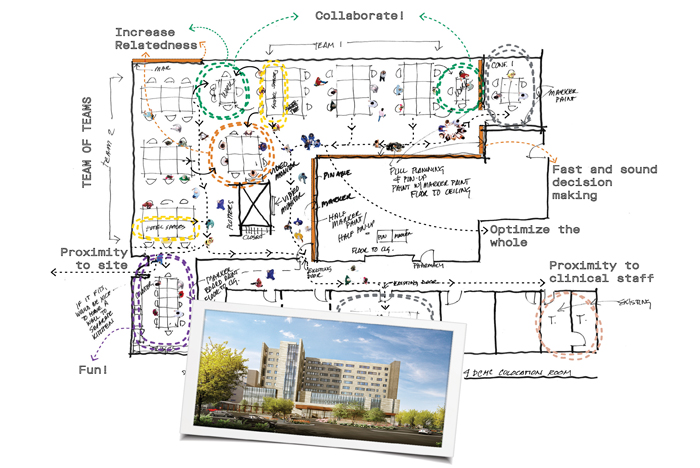 Though it does not require a specific contractual arrangement, at its heart, co-location entails realignment of practices and priorities from that of individual entities to that of the project.

A project team at Banner Health’s Banner – University Medical Center Tucson (BUMCT) in Arizona recently provided a prime example of a big-room experience during a 670,000-square-foot addition that replaces much of the existing hospital.

Comprising nine floors of new construction — including five floors of 240 private critical care and medical-surgical patient rooms — the project consists of labor and delivery, 24 operating rooms and more than 50 imaging, interventional and other clinical diagnostic exam and treatment rooms.

A new main entrance for the medical center, lobby, cafeteria and other public amenity areas as well as a new loading dock, materials management, pharmacy, central sterile processing, blood bank and other support areas complete the new construction. Connections to the existing hospital and medical campus occur on four floors with an additional 75,000 square feet of renovation planned as backfill projects.

Unlike many local co-location setups, the BUMCT big room was located adjacent to the site, 115 miles from the Banner Health offices and the lead offices of the prime architect, lead mechanical-
electrical-plumbing (MEP) engineer and one of the construction managers. Though commutable, this distance increased costs (e.g., travel, hotels and meals) and time commitment to the project. However, the benefit of site access and ease of user participation outweighed these problems.

Initially, two Tucson sites were seriously considered for the big room. The first involved converting an old theater less than a mile away, while the second utilized shell space in Banner Health’s Diamond Children’s Medical Center overlooking the site.

The theater had the advantage of size and adjacent parking, but costs and renovation time proved prohibitive. Converting the shell space in the hospital initially seemed limiting in area for a team of up to 80 people, but its proximity and minimal renovation requirements made it a clear winner.

In time, the selected location proved to be an unparalleled choice. The ability to meet with users, tour existing clinical spaces and point to and walk the site were all unequivocal assets throughout the project.

Coordinating many individual ﬁrms on a single project is highly complicated. The big room brought key project stakeholders together in one place, including the owner, so that team members could literally turn to one another to get answers, rather than chasing emails, phone calls or navigating different time zones to reach team members.

In addition, multidisciplinary cluster groups were established to further break down large constraints, goals and decisions into smaller components for more efficient communication around each discernable scope of work. Each cluster comprised an owner representative, an architect, a general contractor/construction manager, and a specialty trade contractor who all shared their expertise. The cluster group leader was not necessarily the person with the most expertise or seniority, but the person who could challenge the team to innovate and lead patient-oriented thinking.

One of the best things about the big room was the unexpected emergence of leaders from every firm. Perhaps because co-location creates a brand-new entity with evolving processes and limited or undefined hierarchies, there was plenty of opportunity for individuals to step up and take on new responsibilities.

The BUMCT co-location team saw growth and development across all participants, noting three main qualities of a successful team member: agility, risk taker and the ability to respond to the needs of the project.

Prior to moving into the big room, a number of mandatory and facilitated daylong exercises were held to allow for camaraderie and shared process development — including rules of engagement, participation and an understanding of the guiding principles:

Co-location alone does not solve the problem of how to design and document a project; there must be a process that directs the right input at the right time. The BUMCT team found its solution in a scheduling method called rounding, which worked well on a previous, large bed-tower project for Banner in Phoenix.

Instead of turning the project over in traditional design packages, the building was divided into 40,000-square-foot “rounds” of discernable areas similar in program or structure. Each round on this project was brought from schematic design to construction documentation, and passed among architect, engineer and contractor. Rounding made it possible for the engineers and trades to become involved earlier in the process because the work was completed in segments.

Some of the other benefits included allowing coordination and innovation to take place during design; the ability to fast-track the project; and opportunities for more focused user meetings over a shorter duration.

There were many prerequisites, such as MEP systems having to be designed more holistically and comprehensively, requiring a more traditional delivery method. But, while rounding had its complexities, it was this type of ingenuity that challenged the status quo and fueled the big-room environment.

Ingenuity and continuous improvement are at the heart of any big room. Logistics were created and customized for the BUMCT big room that provided participants with insight for future co-location projects, including:

At the end of the day, innovation is the biggest benefit of co-locating and unleashing that potential is the ultimate goal of a big room.

As with any co-location, there will be things that work better than in traditional models, and things that don’t. The promise is a culture dedicated to continuously improve with the project’s interest at its core.

For these reasons, the project team found the bigroom to be a successful strategy and is eager to advance what it learned on future projects.

About this article: This feature is one of a series of articles published by Health Facilities Management in partnership with the American College of Healthcare Architects.

Preparing for the future of health care facilities teams

Demographics are changing in the health care facility field, creating a need for succession planning.

Get involved, get rewarded: The benefits of volunteering