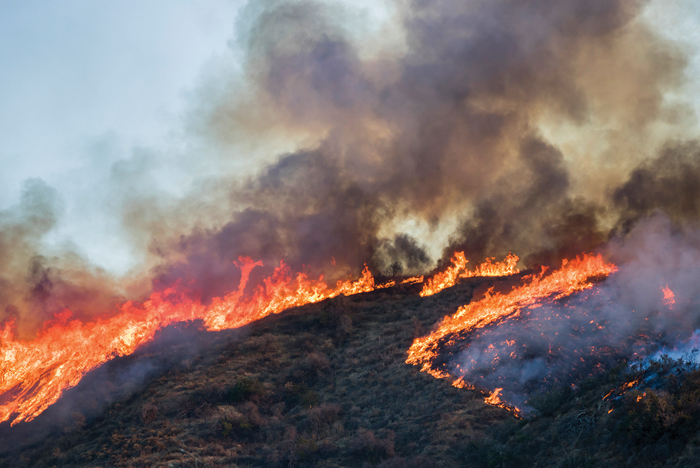 Fires in both Northern and Southern California resulted in significant damage to land and infrastructure.

Hospitals and health care facilities in California are still recovering from two major fires that swept through the state last November. Both fires, the Woolsey Fire and the Camp Fire, began blazing on Nov. 8.

The Woolsey Fire, which affected Southern California’s Los Angeles and Ventura counties, resulted in three deaths, affected nearly 100,000 acres of land and destroyed an estimated 1,500 structures, including several rehabilitation and substance-use recovery centers in the area. The fire was 100 percent contained Nov. 15, and the California Department of Forestry and Fire Protection reports that most of the affected areas have been repopulated.

The Camp Fire, however, requires a much longer recovery time. Eighty-five people died as a result of the Northern California fire, which spread through Butte County. Nearly 19,000 structures were destroyed and more than 153,000 acres burned. The Camp Fire was 100 percent contained Nov. 25 but, according to spokespersons with the California Hospital Association, health care facilities in the area are still evaluating damage and plans for returning to the area.

One of the most impacted health systems was Adventist Health, which has several facilities in Paradise, Calif., one of the towns hit hardest by the Camp Fire. The system’s Feather River Medical Center was forced to evacuate patients the day the Camp Fire started, transferring them to nearby hospitals Enloe Medical Center in Chico and Oroville (Calif.) Hospital.

The 100-bed hospital sustained significant damage to medical offices on its lower level as well as to vital infrastructure, such as its water and septic utilities. A spokesperson for the hospital says that plans to possibly reopen are being assessed as the system gains a better understanding of the damage and whether the population will return.

The hospital has created a team dedicated to recovery, and Wing says the first step was to assess the need for urgent and emergency care and to put those services in place as quickly as possible. A full recovery, he says, will be at least a yearlong process.

“Our goal is to continue to monitor the needs and meet those needs,” he says. “Given the timelines that we have looked at working with our adjusters, working out what it will take to clean up, and with OSHPD [California’s Office of Statewide Health Planning and Development] to restore the infrastructure because that was what was most damaged, the soonest we’ll have services there will probably be 2020. So, it’s going to take all of 2019 to really get services there.”

Other facilities within the health system will be opening soon. As of press time, the health system says that the Feather River Health Center, the system’s largest clinic in Paradise, will open in the coming weeks once public access to the facility is restored. Other clinics in Chico and Corning, Calif., reopened in mid-November, and facilities outside of the burn zone were operational within a week of the fire’s start.

As the health care system embarks on its own recovery efforts, a spokesperson says that Adventist Health is helping its staff recover as well. As of press time, it had raised $6.5 million for its associates and for its fire-assistance fund, which benefits the entire community.

“We are focusing our attention on supporting the immediate and long-term recovery of our associates and their families,” the spokesperson states. “We have informed them that it will be at least a year or more before many services are restored and longer before they reach their former scale. We are working diligently to help associates find new opportunities elsewhere within Adventist Health. … When the time is right and as services return, we encourage those who wish to return to the community to come back.”

Planned and unplanned power outages to mitigate fires becomes a challenge for many facilities.