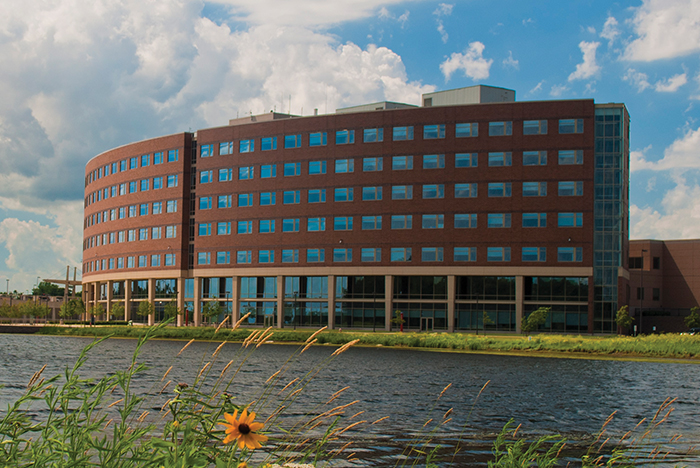 Advocate Sherman Hospital in Elgin, Ill., is powered by a geothermal system within an adjacent lake that heats and cools the facility.

Shortly after the new year, Advocate Aurora Health made a pledge to switch over to 100 percent renewable electricity for its operations by 2030.

The health system operates 27 hospitals and more than 500 outpatient sites in Northeast Wisconsin and Central Illinois. Achieving its 2030 goal would reduce its annual carbon dioxide emissions by 392,657 metric tons.

“As the 10th largest nonprofit integrated health system in the country, it’s imperative that we help lead the way toward a healthy environment that can support healthy people,” explains Mary Larsen, director of environmental affairs and sustainability.

Although the decision was recently announced, Kelly Noel, system vice president of facilities, says it’s a choice that was a decade in the making and will take about another decade to reach.

“We are detailing our strategy to get from where we are today to achieve our future goal successfully,” Noel says. “We’ve been working on this for about the last 10 years and have reduced 20 percent of our energy use during that time.”

The system operates on-site renewable electricity sources, including photovoltaic installations at three of its facilities and a geothermal system at one of its hospitals. It also pursues energy-efficiency projects such as replacing aging equipment, installing LED lighting and configuring energy needs based on occupancy.

As Advocate Aurora Health sets milestones to reach its goal, the system plans to evaluate future major construction and renovation projects to assess their viability for operating more on-site renewable sources. The system will likely use a combination of on-site, off-site and purchased renewable electricity while keeping an eye on its strategies.

“We will have a more detailed plan in the first quarter of 2020,” Noel comments. ”We are looking at our options and possibilities.”