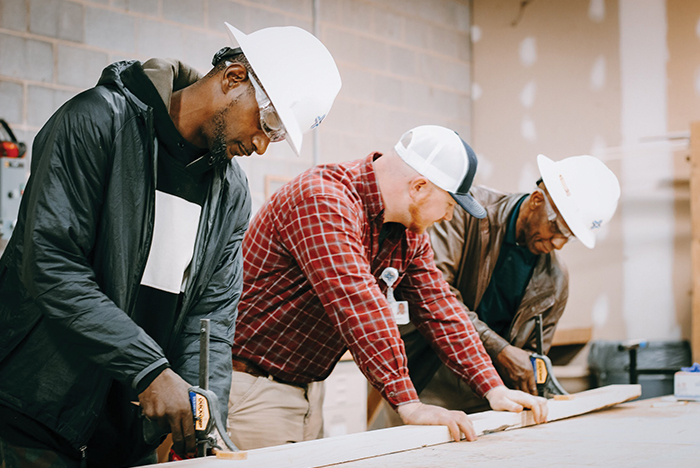 Health care systems around the nation are tasking their facility management departments to do more with less. Not only are budgets tight, but the labor market is, too.

Yet even with two large medical office building projects underway, Spartanburg Regional Healthcare System (SRHS) in the Carolinas isn’t challenged with finding qualified construction labor. The system has created its own pipeline for quality labor that’s supporting its construction department and the local economy.

The Spartanburg Construction Training Program began with an idea back in 2016. To support the severely underemployed community in Spartanburg’s Northside neighborhood, Northside Development Group (NDG) was working to secure grant money for rebuilding projects and wanted to see locals fill the construction jobs.

“That sounded great on paper, but in reality they were faced with a large community that had zero skills in the construction field,” explains Jason Head, construction-renovation manager for SRHS. As Head explained to NDG board member Renee Romberger — SRHS’s now-retired vice president of community health policy and strategy — when she approached him with an idea, there were no local programs providing construction training.

So Romberger asked Head if he would be willing to train these future construction employees.

Head saw this as an opportunity to solve a problem of his own. As the economy picked up, the hospital was challenged with finding labor for construction and maintenance projects.

Because the primary goal was to provide skills training for the community, Head knew he needed to ensure any trainees were employable beyond the hospital. The answer was a partnership with Spartanburg Community College and the National Center for Construction Education and Research (NCCER), a nonprofit certification body. Members of the SRHS construction department became NCCER-certified instructors so that the health care system could become the grounds for hands-on training.

That training became an intensive, 12-week job interview. While the department typically focuses on interior outfits, SRHS currently has underway two large MOB projects. Projects like the 32,000-square-foot, two-story freestanding diagnostic and primary care facility in Greenville County, S.C., have become a great place for students to learn how to do concrete, steel frame and other trades.

The program was first promoted via word of mouth, and five or six people would enroll in a given class. But as graduates rapidly secured jobs that earned them as much as $18 an hour — more than double what many had previously earned — word spread fast. Today, with support from the Spartanburg Chamber of Commerce in promoting the course and sponsoring applicants to cover nominal costs, classes average around 30 students.

One such student learned about the construction training program while living at a homeless shelter. The day before graduating, he secured a job with one of SRHS’s painting contractors. Now, Head says, “He’s one of our best employees. He’s been able to move out of that shelter into an apartment, and he’s working on getting a car back right now. He walks to work every day, and yet he’s one of the few guys who is here every single day. That’s the employee that you create with this program.”

While SRHS employs three program graduates directly, the system works with virtually all of the graduates on a regular basis. “We have up to 100 different subcontractors working here any given day,” Head explains. “Of the 40 students who’ve come through, all 40 have been placed in a job with either us or one of our subcontractors and are working full-time here at the hospital.”

Given the construction training program’s success, the South Carolina Hospital Association has reached out to Head to spread the word about this model. He’s more than happy to promote what he says is “one of the best things I’ve ever been involved with.”

The health care system built its heart and vascular hospital as part of a larger vision.