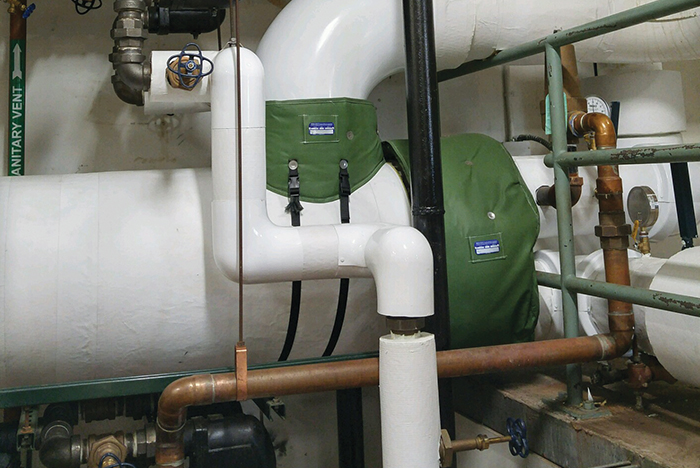 In 1913, Sturdy Memorial Hospital, Attleboro, Mass., opened its doors as a 15-bed facility providing inpatient and outpatient services to the local community. More than 100 years later, the nonprofit, acute-care hospital has grown to 135 beds with more than 1,000 employees who treated nearly 50,000 patients in its emergency care center
last year.

According to facilities personnel, to maintain and operate the hospital’s campus steam system, workers often removed insulation from system components but had no easy way to re-insulate the components because the material was not reusable.

“We would address insulation a little bit every year by placing nonreusable fiberglass on certain points of the system, and because of our need to access components, we would fall behind and never put on as much as we took off,” says Dann Boyer, CHFM, director of facilities operations.

Sturdy’s team wanted to insulate its boiler room, chiller room and the mechanicals in six buildings, including the plumber’s basement. Columbia Gas, the hospital’s provider of natural gas, knew from a previous working relationship that Shannon NRG Resources LLC in Thomaston, Conn., was a provider of proven energy-efficiency measures. The utility asked the Connecticut company to conduct an energy evaluation at the hospital. As part of an energy survey, the team found opportunities for savings on every distribution point across the steam system — nearly 250 components in all.

Once Shannon NRG Resources met Boyer to discuss the survey, the team explained the benefits of an energy plan including reusable thermal and acoustic insulation made by Shannon Global Energy Solutions based in North Tonawanda, N.Y. The New York-based firm engineers and manufactures insulation products, such as blanket insulation, insulation jackets and insulation coverings to meet industry construction specifications and standards as well as energy conservation, thermal efficiency, noise reduction and safety.

A key to approving the project was obtaining a rebate from Columbia Gas. Bob Mulvey, director of sales at Shannon NRG Resources, worked with Sturdy to present Columbia Gas engineers with savings calculations for the uninsulated and poorly insulated components.

“We coordinated our survey and findings with the gas company; whenever there’s an opportunity like this, we involve the customer and help them with selecting the engineering specifications and standards for the right reusable blankets,” Mulvey says. “In this case, we made sure the Sturdy proposal was well organized and assessed for the engineering folks at the utility.”

After reviewing the project, Columbia Gas provided a 50 percent incentive to Sturdy Memorial Hospital toward the cost of the insulation project.

“One room in particular was traditionally really hot,” says Boyer. “The day after Shannon was done, we knew it was working because our boiler operator was wearing a sweater; the results are immediate and dramatic.”

According to the hospital’s facilities operations department, after running a month-to-month heating-degree-day, gas-use comparison for the last two years, the facility appears to be saving approximately $70,000 per year on natural gas with the reusable blankets. The payback is on track to happen in about 13 months. In July 2017, before the hospital installed the reusable insulation, it used about 48,000 therms; last July, the facility used only 40,000 therms. This is savings off the base load of the facility, and, therefore, occurring every month.

According to the hospital’s facilities staff, with the reusable blanket insulation in place, the energy savings the hospital is recouping means it will essentially operate its boilers during the month of December for free every year.

Getting leadership onboard with infrastructure upgrades and new initiatives is key to achieving energy targets.