Conserving resources while keeping the patient environment safe and compliant 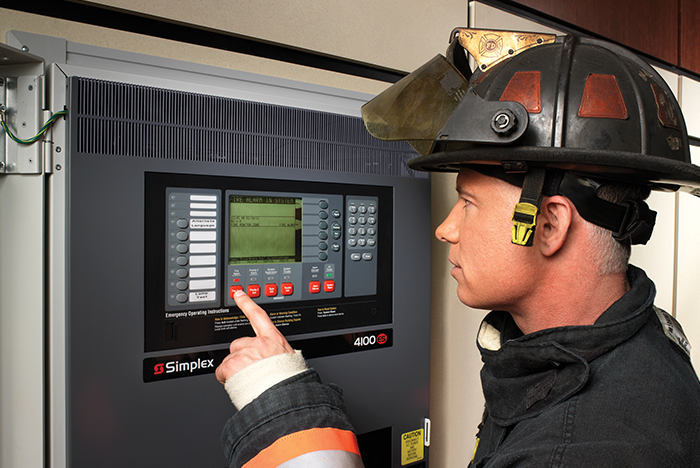 Automated testing will interface with the fire alarm system.

How much money is being spent every year on inspections and tests of building equipment and systems in health care facilities? One large organization documented that it had more than 334,000 inspections and tests required to comply with life safety, fire safety, environment of care, environmental and worker safety standards enforced by local, state and federal agencies.

This is burdensome to the facility not only because of the tasks that need to be performed but the interruption to the operation of the facility, potential infection control risks, additional sources of noise and conservation of natural resources (such as water that is discharged while testing fire protection systems).

One could also ask if the required frequency for these various tasks is appropriate, but data are currently lacking to support changes to most of them. For that reason, the American Society for Health Care Engineering is one of the sponsors of a Fire Protection Research Foundation project that is about to commence to develop a methodology for such data to be collected. The data will be used to analyze the need for some of these tasks as well as the required testing frequencies.

Is it possible that some of these tasks can be automated or performed remotely? Do the standards allow for such testing?

The National Fire Protection Association’s NFPA 25, Standard for the Inspection, Testing, and Maintenance of Water-Based Fire Protection Systems, defines automatic inspection and testing as “The performance of inspections and tests at a distant location from the system or component being inspected or tested through the use of electronic devices or equipment installed for the purpose.”

The concept of automatic inspection and testing is not new to fire and life safety codes. Introduced into the marketplace in the mid-1980s, self-testing and self-diagnostic battery-operated emergency lighting units were first recognized by the NFPA 101®, Life Safety Code®, in 1994 as an alternative to the labor intensive, manual tests of battery-operated emergency lighting units. The monthly test requirement was replaced with a monthly inspection requirement to visually observe the status indicators on the lighting unit.

This issue was recently discussed during development of the 2020 edition of NFPA 25. Previous editions, which recognized automatic testing of water flow switches, required the test equipment to flow water. This was typically done through a recirculating loop.

However, the committee determined that the real purpose of flowing water was to verify that the switch operates and that there is water in the pipe to cause the paddle to move and close the set of contacts. As such, new automated test equipment is being introduced into the market that no longer flows water. The presence of water in the pipe is verified by the time it takes for the paddle to return to its normal position.

Thus, the 2020 edition has been revised to no longer require water flow. Rather, the automatic test equipment verifies that there is water in the pipe.

The technology that can reduce the tasks that need to be performed manually, reduce infection control risks and reduce the drain on resources is broad but includes the following:

Remote inspection fire and smoke dampers. Although not the editions referenced by the 2012 edition of NFPA 101, the 2019 editions of NFPA 80, Standard for Fire Doors and Other Opening Protectives, and NFPA 105, Standard for Smoke Door Assemblies and Other Opening Protectives, have been revised to permit a remote inspection methodology in lieu of visual periodic testing of fire and smoke dampers that are not actuated by fusible links.

The initial acceptance test of the system is required to be performed using the traditional visual inspection of the damper. However, the periodic testing of the damper may be performed using a listed damper assembly consisting of position indicator switches that indicate that the damper is fully open or fully closed. The performance of the position indicator switches is required to be confirmed during the initial acceptance test of the system. When this technology is combined with actuation using area smoke detection, the need to access equipment above the ceiling for inspection and testing will be greatly reduced.

Although NFPA codes and standards are written to allow the recognition of new technology, often specific code changes such as those identified earlier are necessary to gain broad acceptance of the technology. Moreover, authorities having jurisdiction may be slow to accept the technology due to a lack of trust or understanding of the technology.

Even today, some regulators are hesitant to accept the fire alarm control units that are capable of testing the sensitivity of smoke detectors. Additional documentation beyond the listing information of the equipment may need to be submitted prior to approval of the automatic test capability.

For example, the manufacturer of the first addressable alarm notification appliance contracted with the department of fire protection engineering at the University of Maryland to determine the rate of false positive and false negative test results.

The research indicated that false negative results occurred at a rate of less than 1%, and there were no false positive results.

At times, this is for good reason, such as not flow testing a fire pump during a severe drought condition. However, many times, the choice to not test is based more upon the cost or the inconvenience of doing the tests.

The benefits of automatic testing can include reduced cost during the useful life of the building. While the initial installed cost may be higher, this increase can be offset by the reduced cost of periodic testing.

There are significant operational benefits of using automatic testing for health care facilities. For instance, reducing the noise associated with periodic testing of the fire alarm system will help address noise issues, which are often the top complaint received from patients.

In one example, a Midwestern hospital experienced strained building systems in which more than 500 smoke dampers were getting less reliable and shutting down on general fire alarm signals. The hospital also had very old pneumatics and general alarm fatigue. Noise from systems added to the disruptions in the care environment.

A control vendor brought an integrated approach to improving the reliability of building systems including HVAC, controls and sprinkler. The facility staff particularly liked the addressable fire technology because it is less disruptive and easier to support with the self-test function, helping with patient satisfaction. The team was able to associate every HVAC damper to each control with the fire alarm system through advanced programming of the vendor’s systems.

The integration provided more robust control of the fire system and lowered the risk as the hospital can granularly control air flow in the event of a fire. Ultimately, by going with addressable technology, the hospital has been able to achieve a 30% reduction in inspection costs through using less labor.

The infection control risk of damper inspections also is significantly reduced if facility professionals do not need to access an above-ceiling space and open the duct itself to observe the status of the damper. The need to test dampers when certain areas of the facility are not in operation, such as the operating room suite, also is eliminated with dampers that are tested automatically.

Although there is little data to support this claim in general, most people anticipate that the required inspections and tests will be more likely to be performed and documented when automatic equipment is used. This may be less of an issue in health care facilities because the inspection and test documentation is reviewed extensively during most surveys. However, it may be the case in other occupancies with less rigorous enforcement of the requirements.

While some of the automatic testing equipment still requires manual visual inspections, some of the equipment produces detailed reports of the tests performed and the results of those tests. This, too, reduces the cost to facilities to maintain the proper documentation for review by the various authorities having jurisdiction.

The pressures to control operational costs, reduce infection risks, improve the patient experience, and conserve resources calls for research and development of new and innovative ways to perform the inspections and tests that are being performed manually today.

Manufacturers are responding to these demands with solutions to address the concerns of health care facility managers. For instance, part of the motivation to develop the remote inspection damper technology was due to concerns expressed by the health care field related to the cost and disruption associated with damper testing.

When one considers the advances that have occurred over the past 10 years, one can only imagine what technology will be able to offer over the next decade. Moreover, the need for service technicians will not be eliminated, but their usual roles and responsibilities are likely to change as a result.

As these solutions are developed along with better data being collected to document the appropriate frequencies for inspections and tests and better documentation tools, health care facility managers are likely to benefit.

Complying with inspection, testing and maintenance for electrical systems

Could remote inspection become the norm?

NFPA has started a technical committee project on remote inspections.

Facility managers must be well-versed in recent codes and compliance data to avoid deficiencies.