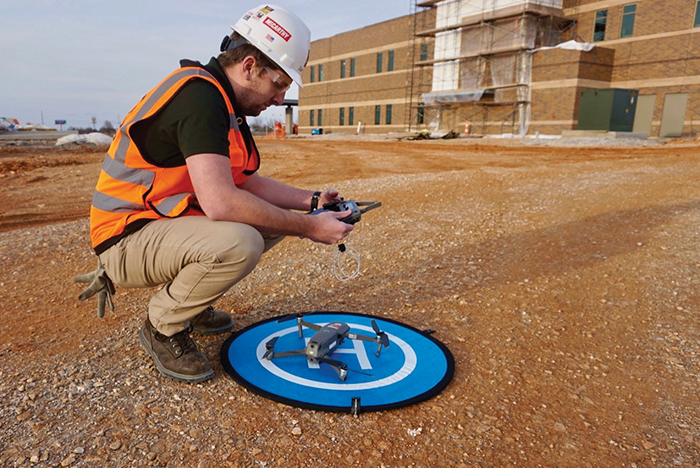 The construction team for a new Mercy clinic used drones to conduct infrared scanning of the building envelope.

Image courtesy of McCarthy Building Cos.

Northwest Arkansas is a major growth hub for the Mercy health system, and one of its newest clinics was designed and constructed with future expansion in mind.

Mercy broke ground on the 31-acre multispecialty outpatient facility in Springdale, Ark., in the summer of 2018 and completed construction in August. The health system contracted McCarthy Building Cos. Inc. to not only coordinate the design and construction process, but also to deliver accurate building data that the clinic could use to support continued maintenance and future expansion.

“As the population continues to soar in the region, there is a growing need for critical infrastructure projects,” says Kerry Harper, executive director of administration at Mercy.

The construction team leveraged building information modeling (BIM) through various use cases such as 3D coordination, virtual reality, drones, laser scanning and 360-degree photography to help streamline construction and ensure that the BIM design files were accurately followed from design through closeout.

For instance, a laser scanning team was sent to the construction site at 50% of installation to scan all major building components, including mechanical, electrical and plumbing, to verify the systems were built as-coordinated. Drones were used for infrared scanning of the building envelope to ensure no water or energy leaks, and to verify safety in areas where the human eye could not.

The project also used photogrammetry in which 360-degree photography could capture high-resolution digital images of every room at different elevations. Alex Belkofer, director of McCarthy’s Virtual Design + Construction Team in St. Louis, says the combination of various reality capture techniques allowed the team to stitch together many digital representations of the as-built conditions to validate install verification for the client.

“During the design phase, we caught a couple of items that the end-user group would not have wanted in the space,” he says. “The use of a BIM-enabled environment view versus looking at a floorplan gave more insight to the project stakeholders, thus we were able to make those changes early without impacting the project.”

Now that the project is completed, Mercy has the ability to take all the building information modeling (BIM) and facility data for integration into their IWMS, or Integrated Workspace Management System. Mercy plans to use the data to standardize daily operation of the 63,000-square-foot facility.

“Having an accurate 3D model and well-documented facility asset data to refer to will be extremely valuable for the maintenance and facilities team throughout the life of the building,” says McCarthy Project Manager Josh Melton.