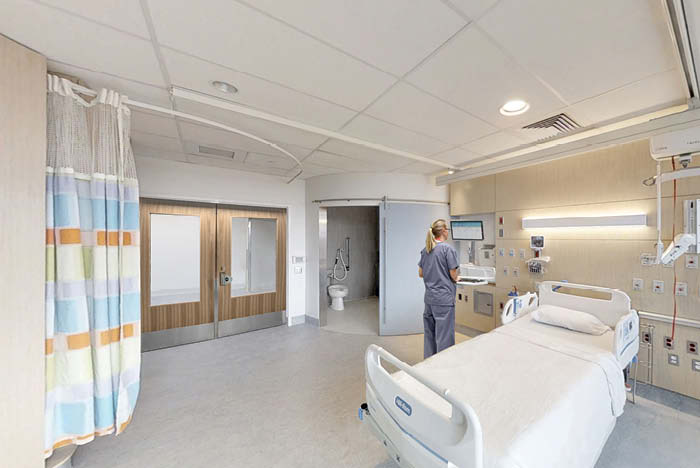 UVA was able to convert existing rooms into airborne infection isolation rooms after the pandemic hit.

When the University of Virginia (UVA) Medical Center set out on the design of its University Hospital Expansion project in November 2013, the plan called for expansion of its emergency department, surgical suite and a new six-story inpatient tower.

Construction began in May 2014, and by January 2020, the expanded ED and surgical floor were done. But when the new inpatient tower was only months from its expected completion date, the COVID-19 pandemic hit the United States, prompting UVA to rethink the project’s design and make some last-minute changes.

The inpatient tower was scheduled to open in June 2020, but knowing that COVID-19 patient surges were on their way, the hospital’s leadership met with its architectural team at Perkins&Will to discuss not only accelerating its open date, but also to redesign the tower to accommodate more airborne infection isolation rooms.

Perkins&Will, along with UVA, Skanska and mechanical engineer BR+A, brainstormed and came up with six solutions, two of which were approved and implemented.

The second solution took longer to install but provided the greatest number of beds for COVID-19 patients. Three 17-foot-high, high-velocity stack fans were installed on the roof to give additional patient rooms negative pressure. This solution made 84 patient rooms available, including nine airborne infection isolation rooms, and 75 slightly negative patient rooms, with 100% outside air supply and all room air exhausted.

Chris Hoy, senior supervisory construction administration manager at UVA, says the quick thinking and flexibility of everyone involved in the project is what helped the medical center to make these life-saving changes.

“When a crisis like COVID-19 hits, there isn’t a rule book to tell you what to do,” Hoy says. “However, we were able to adapt quickly and come up with practical solutions.”