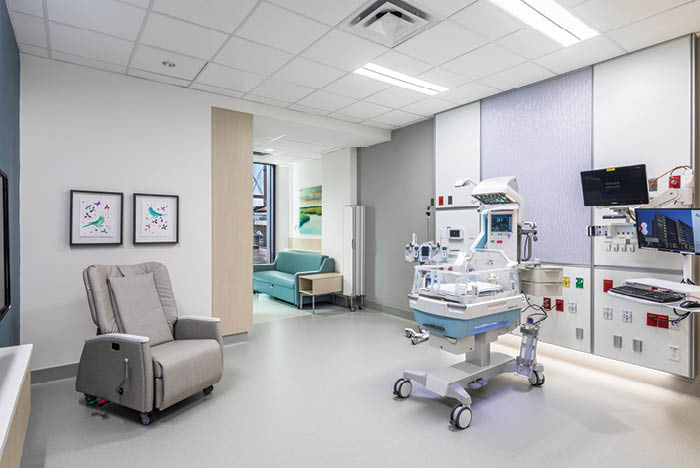 Clinicians were able to test mock-up designs before the NICU patient suites were finalized.

“With the Borowy Tower, we have created a very special place for families to be with their children when they need them most,” says Baptist Health System Director of Construction Kimberly Hansen. “The new neonatal center replaces [a] previously space-constrained neonatal intensive care unit, where bassinets were lined up in an open bay and parents only had access to recliners for bonding time.”

“Our average NICU length-of-stay is one month,” says Wolfson Children’s Hospital President Michael D. Aubin. “That helped drive our decision to build this new tower the way we did.”

“We anticipate using this building for at least half a century, and beyond,” Aubin says. “So, we decided to use the universal design approach, which means that the space around the patient is large enough to accommodate any age in the future.”

Designers created full-sized mockups of the new NICU and PICU rooms, allowing nurses and other caregivers to make suggestions, plan workflows and apply scenario-planning to ensure that space was configured and proportioned for future uses.

“One of the watchwords for this project was ‘intentionality,’” says Frank Brooks, the principal at architectural firm FreemanWhite, a Haskell Company, and the person in charge of the project from inception through construction.

“Going from working in close quarters in an open unit to individual rooms was a cultural change, and we were very intentional in helping the staff figure out how to work in a completely new environment,” Brooks says.

Light and sound were among the crucial elements considered. Decibel levels of mechanical systems and even human conversation were lowered through design and materials, including insulated glass and specialized room shades, in order to help reduce sound transmission and stress on infants’ delicate hearing.

The area was severely impacted by Hurricanes Irma and Matthew, so flood risk was a challenge. The Tower is five and a half feet higher than older campus buildings but matches the elevations of the newer Baptist Medical and Wolfson Children’s Hospital and Baptist Medical facilities, easing movement across the main campus while lessening potential flood disruption.

State-of-the-art technology includes the first-ever Phillips Predictive Analytics System in all 127 new patient suites. This first-of-its-kind platform will use machine learning (artificial intelligence) to gather and display data from multiple sources — from vitals to lab and imaging results — on a screen attached to every NICU bed. Based on specific patient parameters, the touch screen will use yellow, red and green indicators to help neonatologists and other clinicians predict trends that could indicate an adverse event, such as respiratory failure or stroke.

“Through the use of predictive analytics, clinical teams will be able to identify trends early-on and respond proactively,” Aubin says.

The Embrace Neonatal MRI, a self-shielding scanner designed for neuroimaging of the smallest and most vulnerable newborns, keeps babies warm during the scan and allows parents to remain nearby. It is the first such system in place in Florida, and only one of four in the world.

The new 465,000-square-foot facility leverages smart technology in every area, from the patient bedside to the surgical suite.