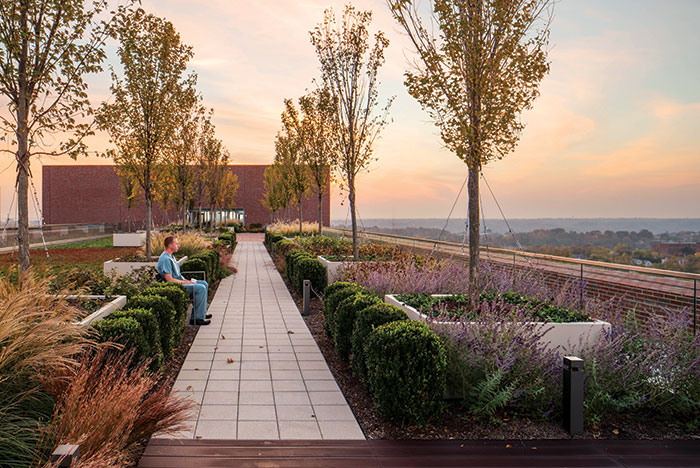 Green roofs, or rooftops covered with a layer of plants, are more popular in Europe than in the United States. However, U.S. hospitals that have installed them find that they provide a wide range of benefits, according to a new study.

Over time, those cost savings pay off, according to a literature review study titled “The Sustainable Prescription: Benefits of Green Roof Implementation for Urban Hospitals.” The study was conducted by a team of researchers from Montclair State University in Montclair, N.J., and published in the May issue of Frontiers in Sustainable Cities.

Not only do the researchers observe cost savings associated with green roofs, but they also find that green roofs are proven to have medical benefits as well. They reduce emotional distress, improve mental health, increase physical activity, decrease pain management needs and hospital lengths of stay, and increase both patients’ and staffs’ overall satisfaction, the study finds.

On a wider scale, they benefit the urban environment by improving air quality and minimizing the urban heat island effect, in which a city’s concrete landscape absorbs and traps heat.

Along with stormwater mitigation, green roofs can benefit efforts to maintain and conserve biodiversity by serving as a reservoir, propagation and dispersal site for native plants and animals, especially in urban areas.

“Mimicking the local ecological system through man-made green infrastructures can accommodate the loss of natural habitats in urban areas,” according to the research team.

In addition to reviewing about 100 scholarly articles, the research team took a closer look at five hospitals with green roofs in the U.S. These included Fletcher Allen Hospital of University of Vermont Medical Center in Burlington, Vt.; John Theurer Cancer Center at the Hackensack University Medical Center in Hackensack, N.J.; University of Michigan Health-West in Wyoming, Mich.; Rady Children’s Hospital in San Diego; and Sharp Memorial Hospital in San Diego.

The researchers identify two types of green roofs, and this group of hospitals includes both types.

“The upfront and upkeep costs of installing a green roof can vary and must be considered before implementation,” the researchers write. However, they also add that, “Compared to traditional roofing, green roofs offer urban hospitals a resilient and long-lasting alternative that, over time, can save the institution money and resources.”

Hospitals travel many routes to go green in their physical environments