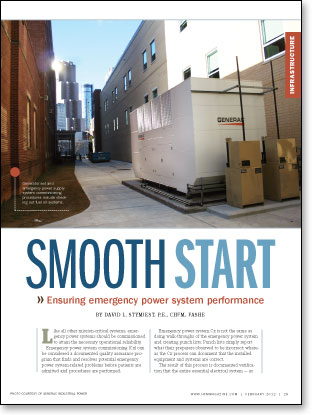 Like all other mission-critical systems, emergency power systems should be commissioned to attain the necessary operational reliability.

The result of this process is documented verification that the entire essential electrical system — as defined in the National Fire Protection Association's NFPA 70: National Electrical Code and NFPA 99: Health Care Facilities Code standards — performs according to the design intent and the owner's needs. This extends well beyond the scope of NFPA 110: Emergency Power Supply System, which stops at the transfer switch load terminals.

Thorough commissioning of a health facility emergency power system should encompass all loads served by that system as well as the generation, switching and distribution equipment.

This is important because it is essential to confirm that the loads connected to the emergency power system are configured to operate seamlessly when connected to both normal utility power and emergency power, and after being switched between those two sources.

In one early example, a hospital found clinical and mechanical equipment operational problems during its monthly emergency power system testing. Likewise, numerous issues have occurred when emergency power loads were transferred from normal power to emergency power and back again. Additionally, equipment failures that would have been found by a comprehensive commissioning process frequently occur when facilities are in operation.

Specific examples have included incorrect overcurrent protection settings, unwanted system interactions, and equipment malfunctions and failures during automatic transfer switch (ATS) operation, among others. Lessons learned from most of the large utility blackouts over the past 20 years include hospitals and other facilities discovering, to their chagrin, that equipment thought to be connected to the emergency power system was, in fact, powered by normal power. In several cases, this discovery occurred when a generator failed because its fuel oil transfer pump or remote radiator turned off.

If such failures or operational issues are first discovered after the emergency power system is placed online, the effect on patients and workers can be annoying in the best case and can severely compromise safety in the worst, not to mention the adverse impacts of downtime, evacuations and bad publicity.

A process, not a test

It starts during the pre-design and design phases with the owner's project requirements (OPR), which document the owner's expectations for both performance criteria and life-cycle issues. Other important data are the Cx specifications and the Cx reviews of the design documents during all stages of design.

Emergency power system design-phase Cx reviews also are critical if a project is to be built or turned over in phases, because the commissionability of early phases can have an impact on facility operation, safety and owner satisfaction. The Cx requirements must be reflected in the final construction documents and the project budget.

These also should be updated to reflect project changes as they are approved. The Cx process confirms the work as it is installed and monitors the startup planning and execution. The pre-functional checklists can include verification of every attribute of every component and may be voluminous.

Detailed, step-by-step, functional performance test scripts for large emergency power systems can be more than 30 pages long. No equipment or operational detail is too small to be verified because future failures often can be traced to small errors or omissions.

For example, generator and ATS failures have been traced to small parts that were incorrect. Likewise, equipment often is shipped without the correct overcurrent protection settings, and neglecting to verify the correct protective coordination settings can cause larger outages than necessary when future short circuits and overloads occur. Moreover, programming errors have resulted in incorrect operation under some scenarios.

Integrated system testing also should test the performance of other mission-critical systems under different loss of power scenarios to document that facility performance remains according to the OPR, codes and standards. Testing should include all designed sequences in a real-world environment and should duplicate actual facility operating conditions, including load distribution between transfer switches, as closely as possible.

Owner training in system operation must be effective and completed before occupancy. Some of the training can be more effective when it is accomplished during the functional testing phase because that may be the only time some of the facility's workers can see how the system works and is manually operated under many different failure scenarios. The training should be videotaped for future use as both retraining and initial training for new employees.

Although the NFPA 110-2005 edition is referenced by the 2010 edition of the Facility Guidelines Institute's Guidelines for Design and Construction of Health Care Facilities, health facility professionals should review the updated and improved installation acceptance test in section 7.13 of NFPA 110-2010, if possible.

The 2010 update was rewritten substantially and reorganized to clarify the intent of the testing. If a project team is considering deviating from the verbatim NFPA 110 requirements because of facility-specific differences, all necessary approvals by authorities having jurisdiction should be obtained.

Examples of functional testing include the following procedures:

Testing for power interruptions under multiple failure scenarios. NFPA 110 no longer requires that a building normal power failure test be performed in an occupied building or facility, instead accepting as an alternate approach the operation of ATS test switches in those situations. The full normal power failure portion of the NFPA 110 installation acceptance test is only required in a new and unoccupied building or facility.

However, in the author's experience, there are certain elements of an installed emergency power system that only can be effectively ascertained by shutting off normal power. These include proving that needed mechanical and clinical systems are fully powered by the emergency power system and will operate as desired upon the loss of normal power. Some people call these normal power failure tests "black start tests," although the NFPA 110 definition of a black start only uses that terminology when discussing types of generator starting systems.

At the conclusion of the acceptance testing, it also will be necessary to perform the first monthly emergency power supply system test in accordance with paragraphs 8.3.2 and 8.3.2.1 from the 2010 edition of NFPA 110.

Emergency power systems are subject to sophisticated regular inspection, testing and maintenance requirements. Many of the inspection and testing requirements are contained in NFPA 110's Chapter 8 and the Joint Commission's Environment of Care standard EC.02.05.07. However, many more recommendations are contained in the manufacturers' operation and maintenance manuals.

The original commissioning report can be an excellent resource when facility professionals are planning this activity. They also may consider performing the latest published NFPA 110 installation acceptance test at this time.

David L. Stymiest, P.E., CHFM, FASHE, is senior consultant of compliance and facilities management at Smith Seckman Reid, Nashville, Tenn. Although he is chair of the NFPA technical committee on emergency power supplies, which is responsible for NFPA 110 and 111, the views and opinions expressed in this article shall not be considered the official position of NFPA or any of its technical committees and shall not be considered to be, nor be relied upon as, a formal interpretation. He can be reached at DStymiest@SSR-inc.com.

Sidebar - Resources on the web

Need more information? The following resources were used by the author to prepare this article.

Resources to prepare for electrical and water system failures.