Health care design and construction professionals love it when a plan comes together. “It’s what we live for,” says Kurt Rockstroh, FAIA, FACHA, president and CEO, Steffian Bradley Architects and Sterling Planning Alliance, Boston. “You get done, everybody’s happy, it’s working great, it looks terrific and you’ve developed a lot of friendships during the course of the project, because everybody was on the same page working together.”

It’s this type of success that the American Hospital Association’s American Society for Healthcare Engineering (ASHE) recognizes each year with the Vista awards.

Amy Eagle is a freelance health care writer based in Homewood, Ill., who specializes in health care-related topics. She is a regular contributor to Health Facilities Management. 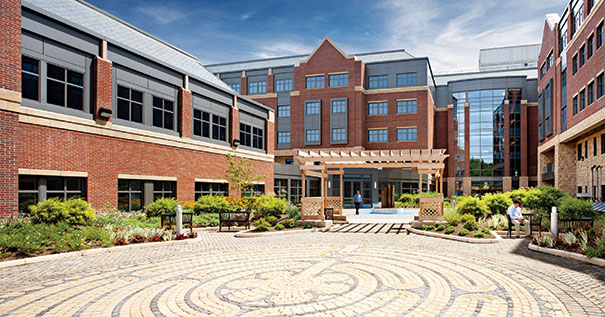 Baystate Health’s Hospital of the Future

Constructing a new facility, essentially from the ground up. The new facility may be connected to an existing facility, but the building must have its own identity and be a new space.

The Baystate Health project team designed and built the first two modules of the health system’s Hospital of the Future, a multiphase expansion of an existing facility.

Phase 1, finished in January 2012, comprises the entire shell and core structure for the project, plus 300,000 square feet of interior fit-out. This includes the consolidated Davis Family Heart and Vascular Center with six hybrid operating suites and four floors of patient units. Major campus infrastructure and circulation improvements also were completed in Phase 1. A 94-bed emergency and Level I trauma center was added in Phase 2, which was finished in September 2012.

The team solicited input from a large number of hospital staffers, patients, local subcontractors and community members in designing the project. Kurt Rockstroh, FAIA, FACHA, president and CEO, Steffian Bradley Architects and Sterling Planning Alliance, Boston, says this input was crucial to ensuring the quality of the project and allowing it to move forward as planned.

To save time and money on major construction, the master plan required that 40 percent of the facility be built initially as shell space, to be fitted out in subsequent phases. Previously, the Massachusetts Department of Public Health (MDPH) had allowed no more than 10 percent shell space for new construction. Rockstroh says testimony from patients, workers and neighbors at the project’s final public hearing persuaded MDPH to approve the project as presented.

By aligning operational planning with the construction schedule, the team was able to meet 100 percent of construction milestones with only minor layout refinements. Construction activity also was carefully coordinated with ongoing hospital operations in the existing facility.

“We had all the very sensitive areas of the hospital within 10–20 feet of our construction site,” says Rockstroh. Operating rooms, a laboratory with equipment sensitive to vibration, and the air-handling intake for the hospital’s surgery department and patient units, including intensive care and neonatal intensive care, are in close proximity to the new building zone. Because of good communication among key players during construction, “we did not have one minute of downtime in any of those departments,” Rockstroh says. 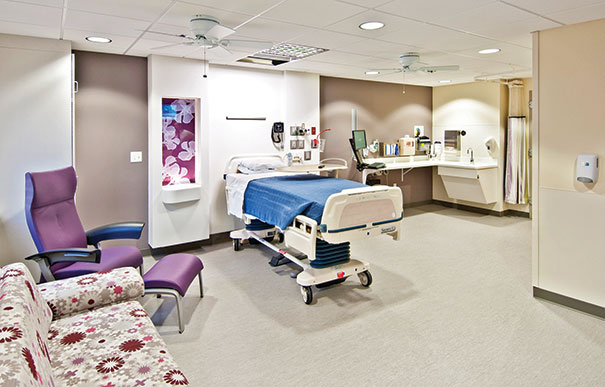 Many people in the group that recently renovated the hospital’s 2nd Floor women’s health unit have worked together for 15 years on various hospital projects.

Angie Warner, director of planning, design and construction, eastern region, Mercy Hospital St. Louis, says the team has developed faith and trust in each other over time. “I think it eliminates a lot of miscommunication, a lot of hand-holding,” she says. “Quick decisions can be made because we’ve been together so long.”

Warner says this was “invaluable” on the women’s health project, which involved the design and construction of an entirely new infrastructure and unit layout within the walls of the original 1962 building. Three wings on the second floor of a seven-story patient tower were gutted for the project.

The team had planned to retain existing pipe chases but discovered that the plumbing infrastructure needed major upgrades. In addition, the medical gas system had to be removed and replaced. Flexible work schedules and daily communication and coordination among all parties kept the project on track, despite these conditions being revealed during demolition.

The new unit’s improved aesthetics and amenities, including all private inpatient rooms, have correlated with higher patient satisfaction ratings. “This is huge, because so much is riding on HCAHPS scores nowadays,” says Warner. She adds that not only has the patient experience improved, but the new environment is operationally efficient, from both workflow and infrastructure standpoints. The unit features decentralized nurse stations and standard equipment locations, as well as new fan coil units and variable air-volume boxes.

According to Warner, being able to renovate an existing space on a dense, built-up campus has been valuable to the hospital. “It’s a great location. It just needed a major facelift and upgrade. So we were all pleased that we were able to do that,” she says. “The benefit and the payoff have been great.” 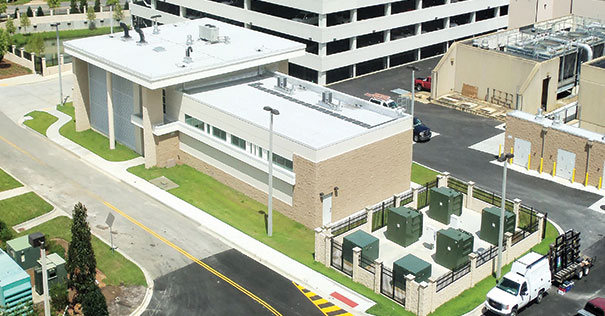 This is the second year in a row that a project at South Georgia Medical Center in Valdosta has won the Vista award for infrastructure.

Tim Davies, PE, LEED BD+C, with engineering firm HPD, Atlanta, credits this success to a generous spirit among team members. “Everyone makes themselves available to help each other out and solve problems,” he says.

For 12 years, the team systematically has been upgrading the medical center’s utility infrastructure. To complete the infrastructure master plan and meet the needs of planned future development on campus, the team designed and built a power plant with four new 2,500 kVa normal services and two 1,750-kW paralleled generators.

The plant includes provisions for a third generator, as well as for plug-and-play roll-up generators to back up the main system in case of catastrophic failure. The power plant is designed to serve a future boiler plant for which space already has been allocated. The capacity of the fuel oil system can be doubled to manage additional loads.

Design elements from elsewhere on campus are incorporated into the plant’s façade and landscaping. The building and site design are meant to unify architectural styles and improve traffic flow on campus.

Given the technical and aesthetic requirements, “this was a tough project,” says Davies. “But the teamwork of everyone involved really made it a success.”