The ED at Parkland Hospital, Dallas, is designed for 180,000 patient visits annually, a figure Kathy Harper, EDAC, vice president of clinical coordination for the new Parkland campus, expects the hospital to meet within its first year of operation at the 2.5-million sq. ft., 862-bed facility.

“About 80 percent of our inpatient volumes come through our ED,” Harper says. “We had to ask ourselves, ‘What volume can we truly handle on this campus?’” Maximum inpatient capacity was a significant factor in the design of the ED, which has 154 treatment rooms divided among the department’s standard ED, Level I trauma, women’s health and behavioral health programs.

The treatment rooms are organized into pods of 12 or 14. Windows in the treatment room doorways are made of two panes of glass with alternating stripes of frosted and clear glass, which can be positioned for privacy or visibility. The solid doors have additional leaves so the rooms can be opened wide enough to admit a trauma team.

The majority of the treatment rooms are standardized at 135 sq. ft.; there are also 10 resuscitation rooms that cover almost 700 sq. ft. each. Four trauma rooms are sized and equipped as surgical suites. “If we do not have time to transport the patient directly to the OR [two floors above the ED], which is always our first preference, we can do procedures directly in the trauma rooms,” Harper says. The ED has five rooms designed to be used as step-down recovery space.

There are two trauma elevators. The largest of these, specially designed to hold an entire trauma team and equipment, is known at the hospital as the “megavator.” It can transport patients from a rooftop helipad to the trauma department in about 30 seconds, a trip measured in minutes at the existing Parkland Memorial Hospital. “Seconds count when you have a trauma,” says Harper.

Dan Thomas, AIA, EDAC, senior medical planner and director of health care planning in the Dallas office of design firm HDR, says evidence-based design informed much of the project, such as the inclusion of natural light in all waiting areas. Harper says the design is intended to help people who are experiencing a health emergency feel comfortable and give them privacy and family space, so “they can just be who and what they need to be at that particular time.”

Streamlining patient flow was one of the primary concerns in the expansion of the ED at Florida Hospital Kissimmee, says Robert Geissler, the hospital’s director of nursing, emergency services and observational medicine. “There are a lot of correlational studies that say the sooner [patients] can see a doctor, the better outcomes they have,” he says.

The expanded ED has separate entrances for walk-in patients and those who arrive by ambulance, and a separate pediatric waiting room. There are two triage rooms, one for rapid assessment and one in which caregivers can begin treatment protocols. Two eight-bed, fast-track treatment areas for low-acuity patients are located on one side of the ED; on the other side, there are 18 critical care beds — including two trauma bays, one for adults and one for pediatric patients, and two rooms for behavioral health patients. In a separate area, there are four treatment rooms designed specifically for pediatrics; each has an underwater theme and lighting that can be changed to match a child’s favorite color. The ED also has a test results waiting area furnished with 12 recliners and a big-screen TV.

Geissler reports that since completing the ED project last October and subsequently building a three-story bed tower at the facility, admissions at Florida Hospital Kissimmee are up 20 percent. “They used their ED as kind of the seed for that market,” says Todd Robinson, AIA, EDAC, principal, Earl Swensson Associates Inc., Nashville, Tenn. Despite the higher volume, the ED’s door-to-provider time and the time it takes to transfer an ED patient to an inpatient bed both have gone down by about 30 minutes, and patient satisfaction scores, as measured by Press Ganey Associates Inc., South Bend, Ind., have risen to near the 50th percentile nationally, from below the 25th percentile, Geissler says. 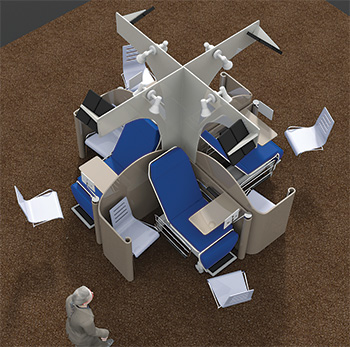 HKS Inc., Dallas, has developed a conceptual design for serving the nearly half of ED patients who can be treated without a traditional bed.

Rush University Medical Center (RUMC), Chicago, uses patient flow software by TeleTracking Technologies Inc., Pittsburgh, to increase organizational effectiveness. The system monitors available beds by specialty, automating a process previously performed by three separate nurses walking the hospital carrying clipboards and searching out empty beds, says Edward J. Ward, M.D., FACEP, assistant chief medical officer and vice chair of the RUMC department of emergency medicine. Getting patients into beds sooner frees up available space in the ED and decreases wait times. With the TeleTracking system, Ward says, the hospital no longer has patients in hallways, waiting for rooms — a situation he describes as “a patient satisfaction killer” — and it is rare for the hospital to go on bypass.

According to Ward, the level of detail the system provides about what patients the facility can handle helps the hospital to operate effectively and make better decisions on allocating resources. Neurologists at RUMC used patient tracking data to calculate the number of patients declined by the hospital by service line and the cost per declination to make a case for establishing a new stroke program at the medical center. Telemedicine features of the software enable RUMC to extend these resources into the community by allowing physicians at several area hospitals to consult electronically with RUMC doctors.

Ward says the system is essential to the hospital’s transfer program, too. The software coordinates transfer requests and automatically documents the process. The transfer center handles nearly 4,000 patients a year, contributing approximately $53 million to hospital operations, he notes.

Future ED environments may leverage technological advances. According to designers at HKS Inc., Dallas, research by leading ED operations analysts shows that nearly half of incoming ED patients can be treated without a traditional bed. HKS has developed a conceptual design for these patients that requires much less square footage than a standard ED treatment bay. The design features semi-enclosed seating areas, called pods, with pull-out tables and other amenities similar to first-class airline accommodations. Each pod has room for the patient and two family members as well as the provider. The environment offers enhanced privacy and personalization, says Mik Pietrzak, M.D., chief medical adviser, HKS Team ED. Patients can use an iPad to communicate with caregivers, play music or change their personal lighting settings. Parametric speakers create a cone of sound around each pod to contain noise and protect patient privacy. The pods can be arranged in a variety of ways to optimize flow and staffing efficiency.