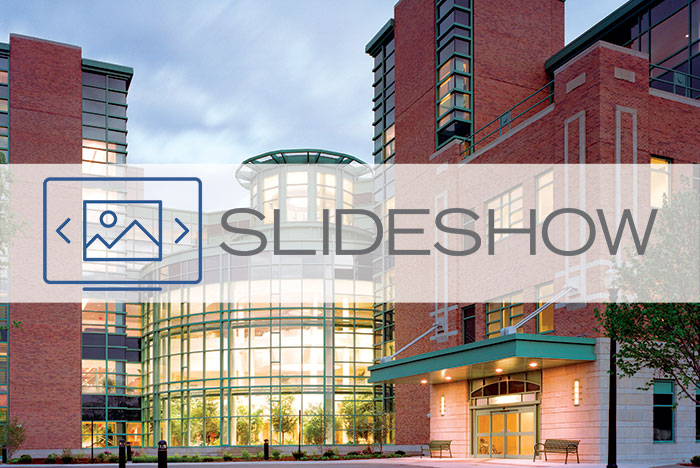 When completed in 2000, the Kalamazoo, Mich., hospital was one of the Center for Health Design’s inaugural Pebble Projects, striving to create a ripple effect in the health care community by documenting the results of evidence-based design and patient-centered care. The facility continues to set the standard for exemplary health care design and the pursuit of quality in health care delivery.

The Community Hospital of the Monterrey (Calif.) Peninsula was named finalist in this year's competition.

Prior to the facility's construction, Bronson struggled with an increased demand for services but had grown haphazardly, resulting in a disorganized configuration with multiple entries, poor adjacencies and limited potential to develop key departments. The city of Kalamazoo also was facing economic disruption as a number of long-standing community employers relocated or went out of business.

To respond to the challenges facing Bronson and accommodate ongoing demand for services and improved access to care, a 1993 master plan put forth a recommendation to construct a completely new facility. When faced with identifying a site for the replacement facility, both hospital leadership and the design team recognized the important role Bronson played in downtown Kalamazoo.

They decided to build the replacement hospital on a 14-acre site adjoining the existing location, representing Bronson’s commitment to the community. In addition, siting the new facility adjacent to the existing facility allowed the existing site to serve as a land bank for future programs.

Bronson was committed to a highly collaborative design process, as evidenced by its winning the 2003 American Society for Healthcare Engineering's Vista Award. The design team, led by the firm Shepley Bulfinch engaged medical staff, administration and hospital trustees as well as city officials, patients and the local art institute to help establish a shared vision.

Although most often cited for its positive impact on evidence-based design, the design of the new Bronson focused on the importance of patient-focused care, in which services are designed from the perspective and needs of the patient rather than the provider or hospital.

The following design traits were some of the major factors that made Bronson such an influential health care facility:

A horizontal hospital concept. The replacement hospital was designed using a layout that aimed to increase operational efficiency and improve the patient experience, while stacking more acute and critical core services to the north on all floors. Each floor was designated by specialty, with dedicated ambulatory services and critical care/medical-surgical beds and the objective of reducing patient transfers (most patients moved horizontally, not vertically). Over time, this arrangement has allowed Bronson to rethink the definition of nursing units and reassign beds and nursing staff as demand changes. For outpatients and visitors, matching the parking garage floors to the same floor-to-floor height as the hospital and connecting on each level has improved wayfinding and made almost every parking space a “good spot.”

Private patient rooms. The use of private patient rooms in the new facility had multiple goals. First, private rooms were aimed at improving overall patient satisfaction and allowing families to stay more comfortably with their loved ones. All single rooms eliminated the potential for conflicts between patients who were sharing a room and supported improved quality of sleep and noise control. Bronson also believed that private rooms might reduce health care-associated infections and measured "before" and "after" infection rates to test the hypothesis. The American Institute of Architects now endorses private rooms as the recommended standard for U.S. hospital construction.

A one-stop-shopping model. The new facility consolidated 11 different outpatient imaging and testing services into one department with a shared registration and waiting area. This one-stop-shopping model sought to improve the patient experience and make more efficient use of hospital space and staff. Outpatients would need to visit only one location, even for multiple tests, such as blood work and X-rays. Segregating inpatient and outpatient diagnostics has meant that outpatient appointments were not at risk of being delayed by unscheduled emergency patients or inpatient crises.

The healing powers of nature, daylight and art. One of the most noteworthy features of the new Bronson hospital is the indoor garden at the center of the building’s four-story atrium. Filled with lush plants, trees and a pond, the garden is visible from all four floors. Applying research that had demonstrated the positive effect of nature on human health, the design team sought to create a healing space that would complement medical treatment and offer a peaceful place of repose for patients, families and staff.

Skylit atria transform the anonymous hospital corridor into a memorable experience. A series of linked “corridors of light” mark the building’s primary public circulation routes. Art is embedded into the building’s design throughout the facility, from the “fish pond” terrazzo floor detail to the exterior brickwork.

The replacement facility was designed with an understanding that it would not always serve as the complete replacement facility for Bronson Methodist. With the continuous increase in demand for services and improved technologies, Bronson leadership and the design team recognized the likelihood that it eventually would become part of a larger hospital campus.

One of the main reasons for siting the new facility adjacent to the current hospital was to be able to preserve portions of the current hospital for future renovation and to save any land where buildings were demolished for future new construction. A few ancillary services, including the clinical lab, remained on the North Campus.

Circulation and physical connections between the new South Campus and existing North Campus were envisioned as part of the 2000 master plan, even though it wasn’t clear which services and programs eventually might be located on the older site. The western edge of the first floor of the new South Campus is a single-loaded public corridor, allowing the public and staff to make their way clearly and comfortably to the new main hospital entrance.

This connection also allows visitors to the emergency department (ED) to connect to the rest of the hospital without entering treatment areas or back-of-house corridors. An existing conference center, located to the southern end of the North Campus, is now conveniently located in the center of the combined campus.

In 2007, as part of its strategic facility plan, the hospital renovated an existing North Campus inpatient building, now the North Pavilion, for its birthing center and neonatal intensive care unit. A number of support services also were relocated to the repurposed North Campus buildings to allow expansion of patient care services on the South, including greater ED capacity, new operating rooms and additional catheterization labs.

In 2013, Bronson Healthcare, Kalamazoo Valley Community College, and Kalamazoo Community Mental Health & Substance Abuse Services announced plans to develop the college’s Healthy Living Campus on a 13-acre site donated by the hospital. The $46 million campus will be a catalyst for urban revitalization, community health and workforce development through sustainable food education, training, production and distribution, and will house the school’s culinary arts and health sciences programs.

Kalamazoo Community Mental Health is opening a clinic on the campus, which Bronson anticipates will alleviate pressure on its ED.

As one of the first Pebble Projects, there was a considerable effort to measure the effectiveness of design concepts used in the new Bronson facility.

The Center for Health Design published a study in 2004 that examined how several metrics had changed since the replacement hospital opened in 2000. Nosocomial infection rates declined by 11 percent as a result of converting to private patient rooms; overall patient satisfaction increased to 96.7 percent; and nursing turnover rates were down to 4.7 percent, far below the national average.

In the 16 years since its construction, the hospital has continued to grow significantly, applying lessons learned from the new Bronson facility to the design of new and renovated buildings on the Bronson campus and beyond.

About the Legacy Project Awards

The American College of Healthcare Architects’ (ACHA’s) Legacy Project Award recognizes groundbreaking projects that redefined at the time what designers, health care organizations and the general public understood about what a hospital or clinic could be, and introduced innovations or supported breakthrough delivery of care concepts.

With its emphasis on time-tested success over momentary design trends, the award honors health care architecture that demonstrates superior planning and excellence in design performance over an extended period, and remains of enduring significance.

The competition requires that the project be submitted by an ACHA Certificant, Fellow or Emeritus. It must be built and continuously occupied as a patient-oriented health care facility in good condition for at least 15 years. For the 2016–2017 cycle, projects occupied no later than Dec. 31, 2001, were eligible.

The ACHA 2017 Legacy Project Award winner remains just as relevant as when it was first built.