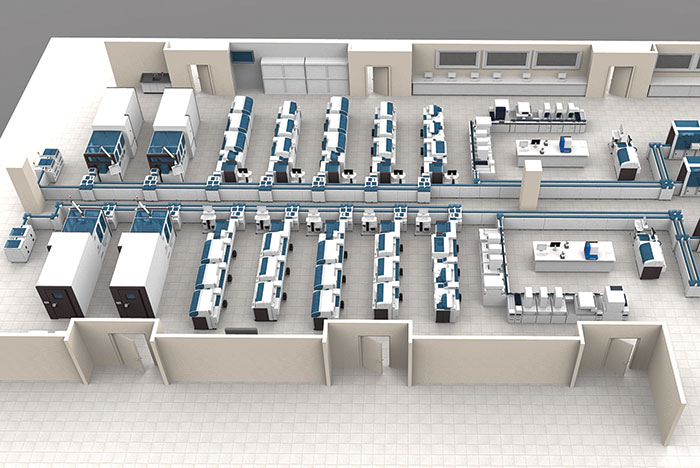 Teams assembled by health care organizations to look at all system costs to root out inefficiencies may find a big target in clinical laboratory services.

However, while bringing lab services from around the system into one location is an obvious solution, little about the process of doing so is obvious.

Consolidated clinical testing (core) labs can significantly benefit health care providers and patients but planning such facilities can be complicated.

With the rise of automated testing systems and the expansion of these systems’ high-volume capabilities comes a greater need to anticipate the flow of samples, equipment and employees, ensuring high functionality and efficiency.

Of equal importance to the science is keeping the lab running like a machine, reducing the cost per test and ensuring that accurate results are returned to patients in hours rather than days.

But cost sensitivity driven by competition is just part of the core lab development story; hospital consolidation is helping to push the trend.

For example, Northwell Health, Long Island, N.Y., came to consider an expanded core lab during a period of ongoing and intense growth, which over the past two years included three hospital mergers and numerous physician practice acquisitions. The now 21-hospital system, which since 2010 has nearly doubled the number of physicians it employs to 3,000, has acquired both redundant lab spaces and a ledger carrying large expenditures for outsourced lab services.

Another contributing factor in the rise of the core lab is advances in testing technology, particularly the enhanced speed and efficiency of automated equipment. Both the high cost of equipment that automates workflows, as well as the higher volume of work that can be performed by such systems, point toward its use in a maximum-throughput lab environment.

Core labs can be tightly focused on such routine tests as chemistry, hematology and coagulation, as Northwell primarily has since opening North Shore-LIJ Health System Core Laboratory in 1998. However, they also can be conceived to accommodate a much wider variety of specialty tests.

One example is Mayo Clinic’s new 70,000-square-foot clinical diagnostic testing laboratory in Rochester, Minn., which primarily supports the Mayo Clinic practice and owes its range of testing platforms to the clinic’s global reach and renowned expertise.

Before making a large outlay of capital on core lab equipment and the building that contains it, a health care system needs to be able to determine the number of tests it performs or pays to have performed, as well as quantify the number and types of tests it hopes to perform in the future.

These are the kinds of figures that inform a hospital system’s budget planning and form the basis for everything that follows: How much core lab staff will be needed to run the lab — typically around the clock — to meet market demand; what background and capabilities will staff need to have; how much equipment will need to be purchased; the capacity of automated equipment; and what infrastructure will need to be provided to support operations?

What sounds like a simple equation — knowing the number and types of tests that will be performed determines the size of the staff and, therefore, the scale of the core lab — is actually very complex because a fixed budget can lay bare tensions between lab staff, who know what they want, and facilities staff, who are trying to limit costs.

However, hospital systems that begin with a budget that allows for a certain square footage, which helps to determine how much equipment can be accommodated and dictates how many tests of various types can be performed, quickly see the limitations of that thinking.

Planning for a future increase in testing volume adds another key variable, with one danger being that a larger-than-needed lab footprint will permit a higher immediate capacity than initially planned. This is another way of stating a corollary to Parkinson’s Law, that a person or organization will expand to fill up any unused space that is available.

Getting down to details

After settling on the larger aspects of the lab program — the nature of the testing that will be performed and the intended testing volume — administrators and planners can then draw a more detailed picture. It is not at all strange for the picture to take shape gradually.

Because of the need for flexibility and the large amount of floor space required to accommodate extended automated testing systems and because the most important metric is cost per test, many health systems will seek out existing large, open-bay space. Ideally, the building is a simple, insulated shell: a well-built, big-box store, for example. This is desirable in spite of many potential issues that can arise.

Northwell’s existing, 60,000-square-foot core lab in Lake Success, N.Y., is being replaced by two automated facilities, a new 36,000-square-foot building in Queens that will be devoted to biological testing and function as the hospital system’s immediate connection to New York City, and 120,000 renovated square feet devoted to chemistry-related testing within a 1 million-square-foot building that houses Northwell’s Center for Advanced Medicine, six miles away.

Northwell’s anticipated testing growth was pegged at between 250 percent over capacity at the start to 400 percent for future expansion, and in time a fully automated workflow and testing system was created by several different collaborating manufacturers in response to Northwell’s needs.

When it is fully implemented in 2018, the nation’s largest private health institution will boast the world’s largest automated clinical testing platform in which two parallel, duplicate lines will run 120 linear feet and together will be able to process up to 20 million tests annually around the clock, utilizing the platform’s various analyzer modules.

Accommodating such an enormous platform and its accessories requires a large area of open space, but its sheer size complicates the need to keep adjacencies logical and flows efficient, both now and in the future. Because loading dock to receiving to processing to accessioning is such an important arrangement of spaces leading to the automated platform and is itself extremely large, the automated platform and its inbound, pre-analytic workflow will sit relatively close to a perimeter wall.

Other workflows — samples moving to and from manual testing areas or refrigerated storage and waste distribution — can’t interfere with each other and thus loosely occupy the other quadrants of open space. If automated systems need to expand in the future, space will be allocated in two directions, presumably those farthest from the inbound workflow. This places other functions, such as offices, conference rooms, restrooms, locker rooms and break rooms, along the periphery to possibly be moved farther away later.

Aside from Northwell’s 40-some pathologists, who inhabit a second smaller floor in the core lab, the other roughly 1,000 employees share offices and open workstations across multiple shifts, which are arranged to allow for close proximity of lab supervisors to their associated labs. These areas likely will be displaced should the floor need to expand. These are some of the costs borne by employees when the primary objective is a lower cost per test.

Labs achieve adaptability through what are now standard design moves: utility services that can be accessed from cables that descend from the ceiling; floor drains provided in a grid pattern, that can be capped when not needed; and mobile furnishings or flexible lab furniture systems in which utilities are prewired and pre-plumbed.

Lab operators, too, have begun to reshape lab functions with an eye toward optimization of the testing process, often using Lean work cell concepts.

Mayo Clinic, for example, has adopted a strategy in which physicians, hospitals and clinics must all send samples in aliquoted form so they can be more easily routed to different testing stations — something that Northwell hopes to do in the future. Many labs are seeking similar ways to streamline operations, such as through bulked-up electronic records, that could have an impact on the floor plan. Receiving samples in consistent form in a consistent electronic format and with a consistent means of tracking could mean fewer staff and less space devoted to accessioning and more to information technology, for example.

Hospital systems around the country are studying the core lab model as a way to hold down costs of testing emanating from their own systems, but also as a means to open an important revenue stream.

New York City Health + Hospitals Corp.’s agreement with Northwell to create its forthcoming mega core lab is being counted on to save tens of millions of dollars annually just from the efficiencies created by closing its existing, sometimes outdated, labs. While such projects are sure to provide immeasurable benefits to physicians and their patients, the economic efficiencies they bring are measurable indeed.

Jim Gazvoda, AIA, is a principal and Jeff Raasch, AIA, LEED AP, is design principal at Flad Architects. They can be reached at jgazvoda@flad.com and jraasch@flad.com, respectively.

Seven steps to avoid programmatic and design issues when building a core lab.

A Florida project is taking shape with sound strategies in place.

A basic guideline to help determine viability of microhospital projects.