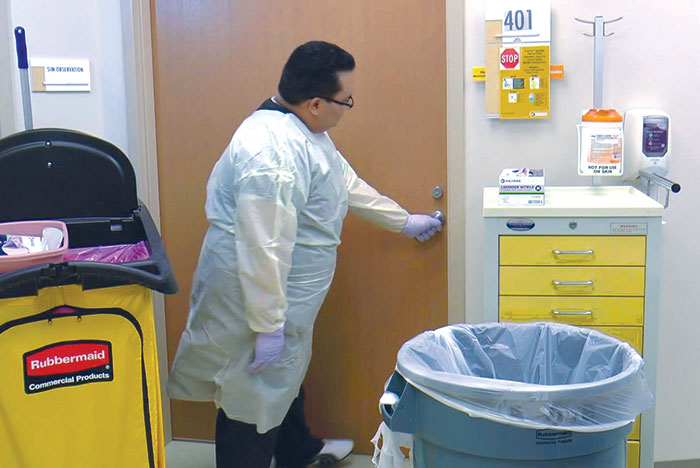 Patients with CDI are placed on contact enteric precautions, which requires donning gown and gloves when entering the room; dedicated use of noncritical medical equipment; and a private room designed to reduce the risk of transmitting epidemiologically important microorganisms by direct and indirect contact. 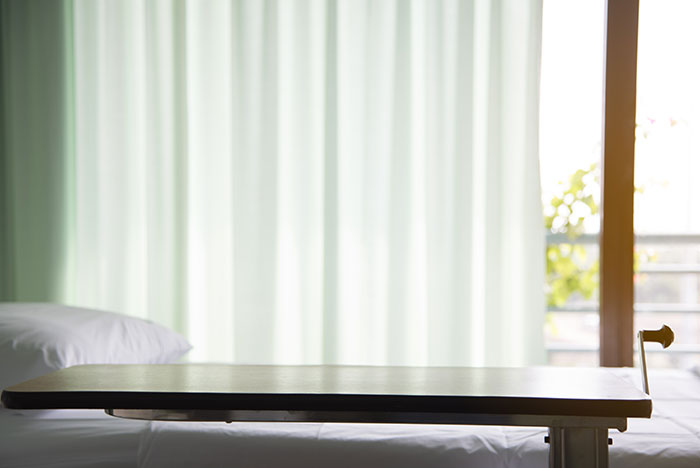 It developed a consistent cleaning and disinfection protocol throughout its ESDs by the following process:

Structured interviews. A literature search was conducted to identify current best practices in patient room cleaning. This information along with expert opinion was used to develop structured interview questions. The questions focused on education and training; logistics, and cleaning of occupied, discharged and isolation rooms.

The ESD managers of the system’s 12 hospitals were asked to submit copies of their current policies and procedures for cleaning occupied and discharged patient rooms and to provide audit processes.

Two investigators conducted 12 telephone interviews, each of which took between 30 and 45 minutes. One investigator asked the questions and took notes in longhand while the other investigator listened and took notes electronically. Transcripts of each participant’s answers were read, reread, aggregated, discussed and synthesized by members of the team.

The findings revealed that the education and training on room cleaning for new personnel had the most variation. Most facilities differed in the duration of training, onboarding methodology and evaluation of competency.

There was wide variation in how the staff cleaned an occupied room. All managers indicated that the first step is to greet the patient and the last step is to ask the patient if there is anything else he or she may need before they leave. Half of the facilities use bleach for daily cleaning, sometimes with a neutral cleaner, sometimes not. When bleach was used to clean, a variety of different cleaners, wipes and sprays were used. All managers reported that high dusting and bed cleaning were not done in an occupied room. Managers reported variation in the number of steps and methods used to clean a discharged room.

Managers reported time estimates ranging from 13 to 60 minutes depending on what was needed in the room. When asked about the barriers in the existing process, family members, visitors and staff were cited as the primary barrier to timely room cleaning. Half reported barriers in the flow of communication, including lack of notification, documentation entered in large batches at the end of a shift, removing isolation signs too early and leaving clutter in the room.

Other barriers were the amount of activity in the room, the number of personal items, the medical equipment in the room, and patient requests or refusals to current processes for cleaning occupied rooms.

It was clear from the structured interviews that several opportunities existed to improve standardization for processes and products across all facilities. These included education and training for new employees, annual competency and audit requirements; universal checklists and assignment sheets; and elimination of cloth cubicle curtains.

A summit. To accomplish these goals, a systemwide summit was planned to engage the stakeholders. ESD managers, infection prevention and control representatives, and nursing leaders were invited to attend. The day focused on developing a consensus among the leaders of what changes needed to be made to improve practices and decrease variation.

One of the main focuses was to make it easy for the staff to do the right things and difficult for them to do the wrong things. For example, pictures of the high-touch areas were taken and made into a card, which was placed on the cleaning cart to remind staff of what is considered to be a high-touch surface.

Education and training of new hires. An eLearning module specific to CDI was placed into the system’s learning management system. This modality was used because it is available 24/7 and can be used multiple times at the employee’s convenience. The modules can be assigned to employees to ensure they have viewed the information to do their jobs effectively.

While new-hire training continues to be managed by the individual sites, the standardized job aids have been integrated with all existing onboarding programs. The visual reference for the 17 high-touch areas reminds employees of the surfaces most likely to be contaminated with organic matter. Employees are oriented to the cleaning checklists and observed as they perform each task. They are also encouraged to reference the lists for each room they clean.

Annual competency and audit requirements. A standardized process for auditing was developed by using the 17 high-touch areas. Within discharged rooms, 30 percent of the surfaces (five surfaces per discharged room) are audited on a weekly basis and data are collected by infection prevention and control professionals. Adenosine triphosphate assays are used, results are reported monthly and feedback is given to staff.

Universal checklists and assignment sheets. Standardized cleaning checklists were created as job aids to match the updated policies and are used by managers to monitor performance. Each specifies step-by-step instructions for tasks that personnel are required to perform and which product to use for each task. Copies have been laminated and placed on each associate’s cleaning cart to make them convenient and ready references. Some facilities also supply paper copies and require associates to document each task performed for each room cleaned.

The Centers for Disease Control and Prevention’s National Healthcare Safety Network data were used to assess the quantity of positive CDI, HAI, community-onset (CO), and CO-HAI specimens and HAI-only specimens within specific rooms in 12 hospitals.

Focusing on decreasing infections — including surface-disinfection measures, education and training, and checklists — contributed to decreases in health care-associated and community-onset CDI-positive cases.

ESD managers care deeply about their staff, and support them in taking the time and having the tools they need to thoroughly clean patient rooms.

Standardization of processes and products in all facilities can decrease the variation in education and training for new-hire training, annual competency and audit requirements, checklists, assignment sheets and tools.

Cleaning and disinfection of environmental surfaces

AHE certifications for cleaning and disinfection

Group offers certification for workers and managers at every level of the ES profession.