Logout
Home » White Plains Hospital recognized as one of most beautiful hospitals in U.S.
Renovation 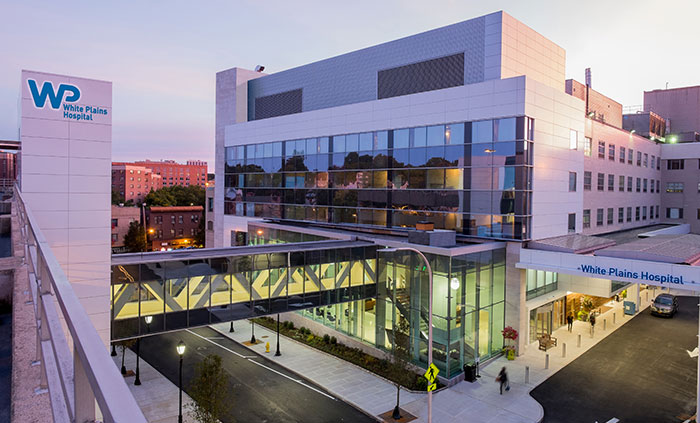 White Plains Hospital landed at No. 8 on the list of 2016's Most Beautiful Hospitals.

The 123-year-old White Plains Hospital has gone through a series of expansions and renovations over the past few years. With the completion of each new project, White Plains says that it is “unveiling the hospital of the future,” and its efforts have marked it in history as one of 2016’s Most Beautiful Hospitals.

White Plains made Soliant Health’s Top 20 Most Beautiful Hospitals list this year and was the only New York hospital to do so. It's also White Plains first time making the list. The hospital, located 25 miles north of Manhattan, was nominated by Brian Kerr, a patient from Mamaroneck, N.Y.  “I was so amazed with how the hospital has grown and advanced so much in such a short amount of time. It really is impressive and a beautiful healing environment.”

It seems Kerr wasn’t the only patient who felt that way. The hospital garnered nearly 10,000 votes, placing it as No. 8 on the list in a competition of 70 entries. 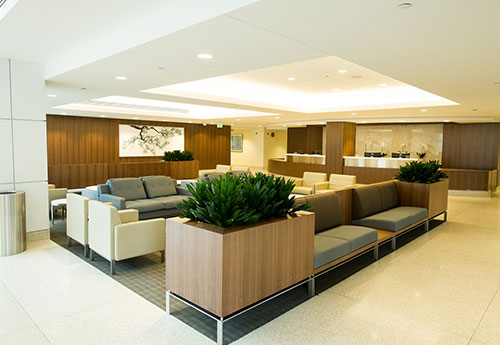 Warm colors and natural textures take the hospital away from an institutional look toward a more inviting atmosphere.

The hospital’s leadership says White Plains’ campuswide transformation is focused on creating a comforting environment for patients and families to aid in the healing process.

In April, the hospital opened its expanded labor and delivery suites that allow mothers to labor, deliver and recover in the same room. It now offers six private labor and delivery suites, up from four, each measuring 400 square feet. Each room is large enough to accommodate three different functional areas: an area for the patient’s labor; a dedicated family space including a sofa that converts into a sleeper, and a flat-screen television; and a third clinical zone around the birthing bed with a baby warmer. The room includes a large private bathroom with a full shower.

“We are providing our patients with access to exceptional nurses and physicians, as well as state of the art technology combined with comfort and convenience during their hospital stay,” says Leigh Anne McMahon, R.N., senior vice president of patient care services and chief nursing officer. “New parents now have the opportunity to get this high level of service right in their community. It’s the type of high-quality care people have come to expect from White Plains Hospital.” 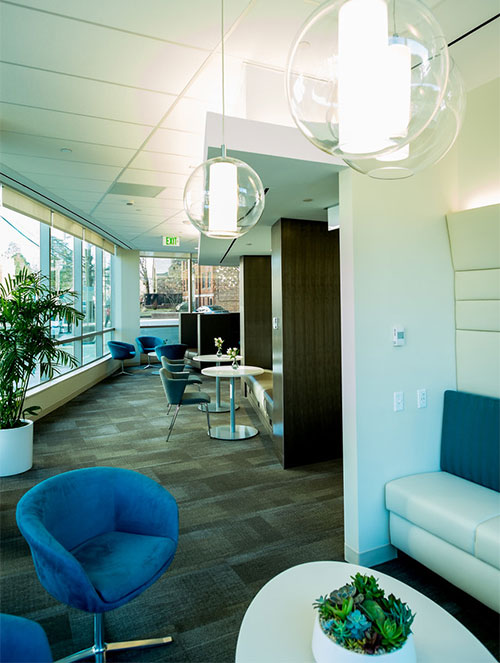 Natural light and colorful plants are found throughout the hospital's lobbies.

White Plains also unveiled its 70,000-square-foot cancer care center in February. The six-story tower has a new entrance, lobby, amenities and physician offices to accommodate the hospital’s growing number of cancer experts who have joined since 2011. The new center also includes expansive conference space to accommodate regular tumor board conferences, where physicians from a variety of specialties meet to collaborate on the best treatment plans for each individual patient.

Other physical environment improvements include five new operating rooms; 24 new private patient rooms to enhance comfort and privacy; a new entranceway and lobby that includes a café and boutique for visitors and employees; and a renovated cafeteria outfitted with healthful food options and a comfortable seating area.

Many of the new spaces throughout the campus were decorated in warm earth tones, with wood paneling, abundant natural light and colorful plants to evoke a sense of bringing the outside indoors — all helping to enhance feelings of calm and relaxation during stressful times.

“Environment plays an important role in enhancing wellness. So, as we've grown and expanded, we've worked to create beautiful, functional and inviting spaces,” says Ossie Dahl, vice president, facilities. “By using natural textures, woods, colors and light, our spaces are a refreshing departure from a typical hospital environment, which underscores our commitment to providing the best care to the community.”

Others on Soliant Health's 20 Most Beautiful Hospitals in the U.S. list include Doctors Memorial Hospital in Bonifay, Fla., Elmhurst (Ill.) Hospital and McKay-Dee Hospital Center in Ogden, Utah.

White Plains transforms to 'hospital for the future' with new construction

The Center for Cancer Care was expanded to 70,000 square feet with an additional two dozen infusion bays