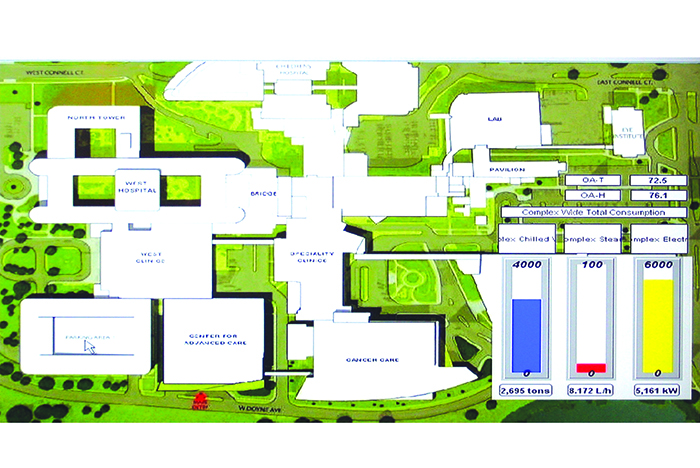 Froedtert Hospital and the Medical College, Milwaukee, has saved nearly $13 million with measures such as a real-time monitoring system.

Image courtesy of Froedtert Hospital and the Medical College

After Froedtert Hospital and the Medical College, Milwaukee, determined in 2009 that its campuswide energy use was highly unacceptable, the hospital and its facility department committed to reversing the situation.

An academic medical center with 520 beds and the only adult Level I trauma center in eastern Wisconsin, Froedtert decided in 2009 to reduce operating costs using demand-side, energy-reduction efforts.

At that time, utility bills consumed 60 percent of the plant operations' operating budget and the Energy Star score for the 2.5 million-square-foot campus was 13, Boor says. Both metrics — an Energy Star score of 50 is average — pointed to excessive energy consumption.

The first step in the process was to evaluate previous energy consumption data for the six clinical and specialty facilities on the hospital’s campus to target the largest energy consumers, Boor says.

Once these buildings were identified, walkthroughs, energy audits and staff interviews were completed to understand the inefficient operations of the facilities, Boor says.

As they identified system faults, the facility department took steps to curtail energy usage. Key among those were:

“Keeping the leadership informed has been a key element to the success of the program as they have insisted that continuing forward is vital for the hospital as well as the community,” he says.

Froedtert has cut its utility spend on plant operations to 48 percent of its budget from a high of 60 percent and improved its Energy Star score from 13 to 55, he says. The goal is to reach 75 by 2020 to become Energy Star-certified.

For its accomplishments, the American Society for Healthcare Engineering honored the hospital with an Energy to Care Award in 2013 and 2016.

Benchmarking and a staged approach lead to better energy performance