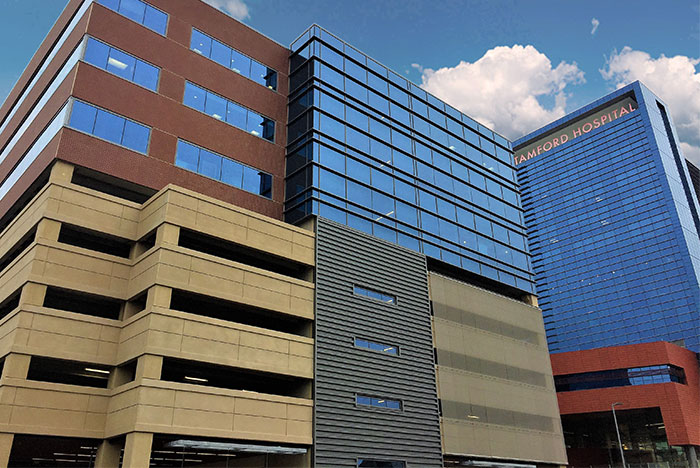 The 97,000-square-foot pavilion features three levels of clinical offices on top of a 382-space parking deck — all connected to the hospital via a glass-enclosed skyway.

Prior to the project groundbreaking, MedCraft took the Stamford leadership team and several physicians to a facility on the West Coast, encouraged conversations with their peers and challenged them to think differently about their care delivery models. 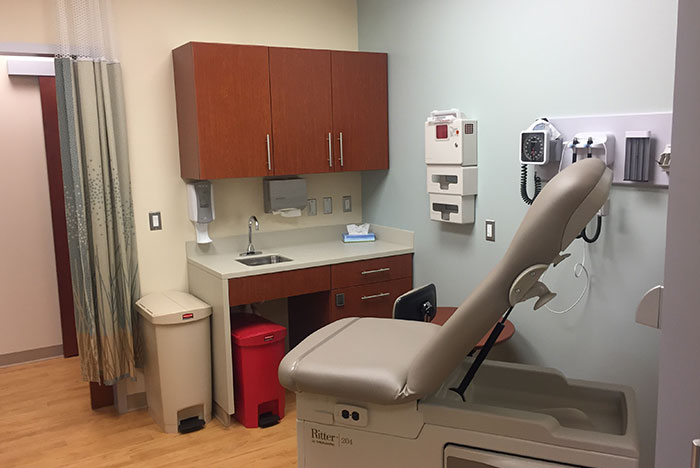 The project team developed cardboard mock-ups to give stakeholders an opportunity to walk through the space and offer feedback.

MedCraft then developed life-sized cardboard mock-ups for community, staff, patients and providers to walk through and provide input on the final delivery model.

MedCraft and Stamford Health began the concept for the pavilion when the hospital system was developing its campus revitalization plan. The result is a new, multispecialty, one-stop health care destination that is an extension of the hospital's commitment to patient-centered care.

"The ICP represents a successful partnership of many teams to realize the vision for a unique, collaborative facility," says Stephen Buckeridge, MedCraft development principal.

"We are honored to have helped bring to life an environment that embodies the vision that Stamford Health has for community-driven, patient-centered care for today and the future," he says.

The first SHMG practices available for patients are electrophysiology, cardiology and thoracic surgery offices. During the next several weeks, additional practices and hospital-based services also will open.

"MedCraft brought a unique expertise and confidence to developing the ICP on our campus and a vision for new methods and delivery models that support our patient-centered clinical needs," says Cindy Fitzgerald, vice president and chief operating officer, Stamford Health Medical Group.

"Together we envisioned the future of health care and created an environment for patients while enabling greater collaboration by clinicians," she says.

The new pavilion is part of ongoing revitalization on campus where earlier this year the new $450 million Stamford Hospital opened. The hospital received the Planetree Distinction Award for its patient-centric design.

Construction on the new hospital is expected to begin in summer 2017. The new hospital will provide comprehensive, inpatient physical rehabilitation to patients who have experienced stroke, trauma, brain injury, complex orthopedic conditions as well as other major illnesses or injuries.

The contracts are for design-build construction and initial outfitting. United Excel holds the contract to design, build and equip the clinics, and KAI will provide the mechanical-electrical-plumbing engineering work.

The project will be designed by Mike Hale Architect LLC, and Adolfson & Peterson Construction will serve as the construction manager. It will add operating rooms, space for materials management, a new 25-bed hospital wing, administration offices, 16-bed physical rehabilitation wing and a new central plant. Renovations are targeted for the pharmacy, lab and offices and will include converting current hospital rooms into assisted-living rooms and other space into independent-living apartments.