A major hospital in the Midwest has embarked on a large expansion and renovation project, for which the owner/designer/contractor team has made a commitment to maximize prefabrication opportunities. 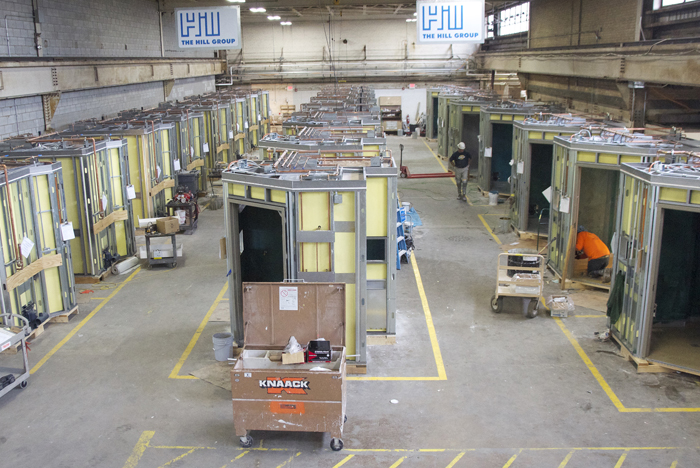 Collaboration on developing plans for prefabrication has been enabled by utilizing Integrated Lean Project Delivery®, developed by The Boldt Co., Appleton, Wis., which places partners together in a “big-room” setting. The big-room partners include the contractor, client, designer and local architects, mechanical-electrical-plumbing and civil engineers, trade partners (e.g., electrical, HVAC and plumbing) and the prefab consultant. The partners work as an integrated team to assess opportunities for prefab and to develop a plan for executing prefab construction.

An early activity was to create a prefab element scoring sheet for possible items or systems to prefabricate. The team came up with four categories: headwalls (four items); ceilings (four items); racks and risers (five items); and others (58 items, ranging from elevators to telecom rooms to air-handling units to modular generator plant). Each of the 71 items was charted under the following categories: single- or multitrade; responsible trade; and collaboration, contractor-driven or subcontractor-driven.

The items were scored by partners for availability, feasibility, applicability and other factors, creating a prioritized list of items to prefabricate.

Next, the team worked together to brainstorm and establish constraint logs for each item to be prefabricated. For example, 36 questions came up for headwalls, such as: Are the quantities of receptacles and medical gas outlets known? What are the above-ceiling connection points? What are the acoustical and fire-rating requirements? Is there sufficient square footage to include a parent wall? How is the vendor being integrated into the building information modeling execution plan?

At the same time, research was performed on manufacturers and suppliers to determine candidates to consider. Requests for proposals were sent to leading candidates and a short list was developed for interviews. Together, the team created a list of questions to ask at the interviews. Final selection of each manufacturer-vendor was made using a Lean A3 analysis.

One big takeaway from using this process is that many design decisions need to be made much earlier in the process than they typically are in a traditional construction scenario. While this can create challenges for the design, construction and owner team, it also forces a discipline that is intended to result in a superior design outcome and a greater certainty on cost.

The hospital’s new tower was designed to allow for future vertical expansion.