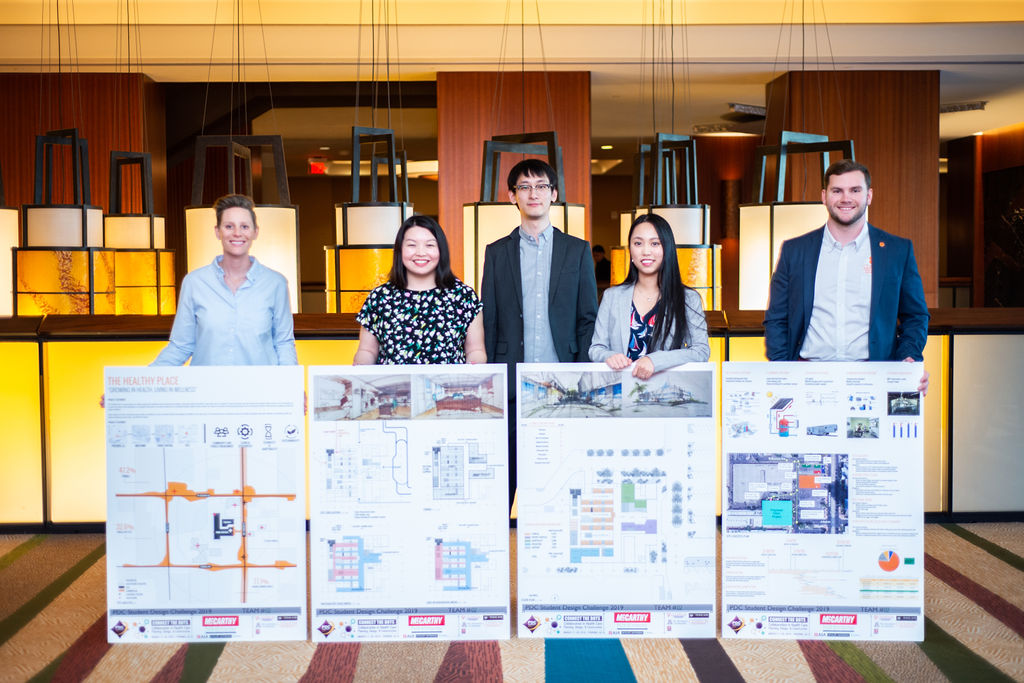 Vacant retail spaces dotting cities across the U.S. has created a unique opportunity for the health care field as many systems look to take advantage of these existing and primely located spaces. Answering just how hospitals can transform these spaces and optimize their use, however, is an art that’s still being perfected. It’s also the challenge that was presented to a group of college students at the International Summit & Exhibition on Health Facility Planning, Design & Construction (PDC Summit) that wrapped up in Phoenix last week.

Eugene Damaso, AIA, NCARB, GGP, EDAC, design leader at RLF Architects, served again as task force chair for this year’s competition and says the students were challenged to innovate around a topic facing many who are responsible for planning health care facilities.

“Vacant retail spaces are potential spaces for health care because they are meeting the customers and the patients where they’re at,” Damaso says.

The students were taken to a vacant facility two miles north of downtown Phoenix in the city’s Midtown District. During their site visit, the students examined the site and asked questions of their schools’ professors who served as mentors during the challenge. Following the mini-field trip, the students split into their respective five-person teams with one student from each college per team to envision and plan the design and construction of a health and wellness clinic.

Damaso says the interdisciplinary challenge gives the students a foretaste of how their professions function beyond the classroom.

“Bringing the different schools actually allows us to create an environment similar to a work environment where you really don’t get to choose who you partner with and the people that you work with,” Damaso says. “So [the challenge] is really coming with an appreciation for diversity and different thinking.”

Students from Team 2, which was the winner of this challenge, say they saw the concept play out clearly during the competition, albeit a bit late in the game. The team was comprised of nursing student Ashley Hopkins; Miya Preston from MSOE; Garret VonMinden, who studies construction; Xi Cao, architecture student from Clemson; and Xiaolei Wang who studies architecture at Texas A&M.

The team explained that for the most of the two-day challenge, the students operated as individuals and that it was evident during pre-presentations in front of the mentors. Knowing that their plan lacked wholeness, the team began crystalizing those ideas into a complete concept at 10 pm the night before they were to present before the competition’s judges,.

Team 2’s programming for the space focused on the area’s key demographics, including mother and baby care, and young adults. Their design featured 32 exam rooms and was guided by four factors: community and public engagement, clinical efficiencies, flexibility and adaptability, and sustainability. The team’s layout features three entrances to accommodate the different ways in which the public will enter the space: A pedestrian entrance, an entrance for those dropping off patients and entry through the facility’s parking structure. At the front entrance sits a café and kid’s area and patient services such as registration and labs are across the hallway. Clinical support is situated in the back of the facility outside of patient view, while the community spaces designed for health and wellness programs face a pedestrian walkway to capture the public’s eye, inviting them inside.

The team says that some of its most innovative ideas came from unlikely sources. For instance, the team went through various ideas on how to convert the facility’s loading dock into a functional space. Once it became clear that re-constructing the dock was cost prohibitive, VonMinden, the team’s construction student, suggested simply using the dock to bring in mobile health care services into the community on an as-needed basis. It became a standout feature of the overall clinic.

“I think too often for each discipline we get too focused on what we’re specifically doing that we kind of forget about the whole picture and that there’s other people involved,” Preston says. “For a design like this where we’re so focused on having a holistic design, [it’s important] that all parts equally have a voice and a say in the design.”

The challenge was organized by Orcutt Winslow, The American Institute of Architects and the American Society for Health Care Engineering. The Nursing Institute for Healthcare Design and McCarthy Building Cos. sponsored the event.

Watch the video below to see the students in action:

Converting shopping venues for health care applications comes with a number of opportunities and risks.