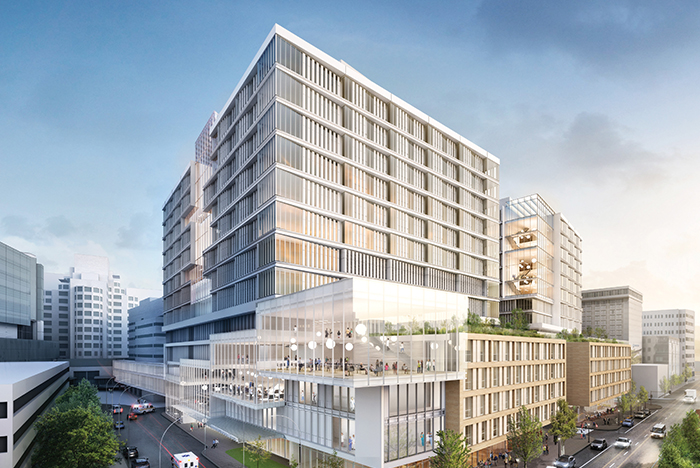 The 1-million-square-foot facility will feature 12 levels of inpatient, outpatient and support services space, as well as six levels of underground parking. David Hanitchak, vice president for real estate and facilities, says the project will also serve as a place of “refuge in times of disaster.”

“Like many coastal cities, Boston is susceptible to the impacts of changes in our climate,” Hanitchak says. “In addition, much of Mass General’s campus sits on land that was once water and marsh, making it especially vulnerable.”

Mass General is working with design firm NBBJ and will adhere to guidelines established through the Department of Health and Human Services Sustainable and Climate Resilient Healthcare Facility Initiatives. The planned design also will exceed emergency preparedness requirements established by The Joint Commission and Centers for Medicare & Medicaid Services.

The hospital has identified adverse events such as sea-level rise and storm surge, extreme temperatures, high wind, seismic events and human-caused disasters as key incidents to protect against through its design.

Some of the resilient features of the new facility will include infrastructure and supplies to sustain 96 hours without outside resources; space and technology for an emergency command center; elevating critical equipment to sustain a 6-foot flood; hurricane-proof windows and exterior skin; cooling systems, building façade and mechanical capacity to withstand increased number of days above 90 degrees F; elevating critical programs above street level; submarine doors and watertight safety features to protect elements below street level; and green infrastructure to absorb storm and flood impacts.

In addition to those strategies, Hanitchak says the hospital is learning from work NBBJ has done in other disaster-prone areas and is evaluating using features such as operable windows for emergency situations. It is also looking into infrastructure and layout plans that will allow it to continue receiving ambulances during floods and additional medical gas equipment to accommodate patient surges.

“Hospitals are critical community resources, and especially so in times of disaster,” Hanitchak says. “Hurricanes Katrina in New Orleans and Sandy in New York demonstrated the importance of these health care facilities and the hardship caused when they cannot continue operations.”