When looking to update their facilities to 21st-century standards, many rural hospitals have some of the same goals in mind.

These include creating a one-stop shopping experience, so patients don’t have to travel far or to multiple locations; creating single-patient rooms equipped with full bathrooms for privacy and better infection control; and wiring rooms for either new or future technologies.

In some cases, hospitals decreased the number of inpatient beds due to fewer admissions and a greater focus on preventive care services.

These projects show how rural hospitals around the country are building new space or renovating existing structures to equip their facilities with more services and modern amenities.

A building is born

“The old hospital’s rooms were semiprivate; only one patient room had a toilet and only one room had a shower,” says Christina Campos, FACHE, administrator. “Most inpatients had to either walk to that bathroom or use a portable toilet.” The computed tomography scanner, located in a separate portable building in the parking lot, was also inconvenient for patients. 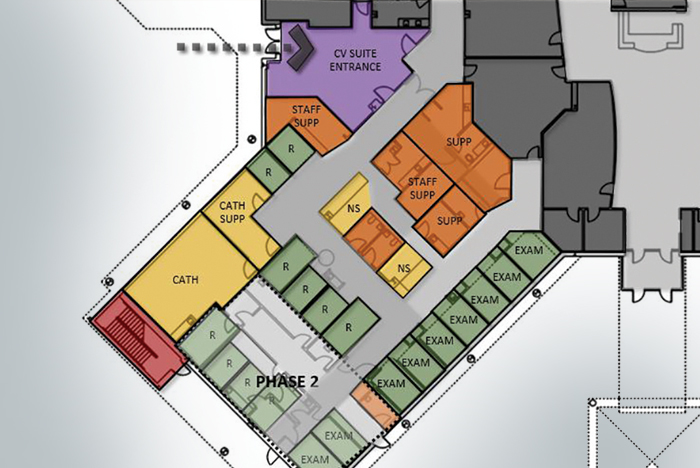 But that was just the tip of the iceberg regarding the former hospital’s drawbacks. The building housed two small emergency rooms, didn’t have a lobby, lacked parking space, and had no place to land a helicopter — so it had to land on the street. Also, oxygen, suction and tanks had to be rolled into rooms because they weren’t built in. Wi-Fi was limited because of the building’s cinder block construction and all wiring was external conduit. Although the building did not meet state or Centers for Medicare & Medicaid Services standards, it was grandfathered in for many years.

Several of these rooms had been converted into meeting or office space over the years and, by 2004, only five inpatient rooms were needed for patient care due to declining admissions.

The hospital foundation acquired 8 acres for a new 33,000-square-foot, $15 million facility, and donated it to the county — the new hospital’s owner. The new design called for each room of the 10-bed hospital to be outfitted with a sink, toilet, shower and space for family members to stay. The emergency department (ED) comprises three bays containing a total of four beds. The hospital also has a decontamination room, centralized nursing station, centralized supply room and med room, a tub room with built-in patient lifts, radiology suite, spacious laboratory, large lobby, break rooms, boardroom, meditation room and call room for on-call providers. Space was allotted for future technology. Additional space includes lease space for a local retail pharmacy, lease space for a local for-profit primary care clinic and county-sponsored space for the public health office.

The new building has many notable features, including being Leadership in Energy and Environmental Design (LEED)-certified by the U.S. Green Building Council, with such features as LED fixtures, energy-efficient HVAC units, natural lighting throughout and locally procured sandstone elements. The campus has ample parking, a helipad, and a pad for mobile units (e.g., mammogram or magnetic resonance imaging units). A dental clinic was later constructed on the campus and is part of an additional 3,500 square feet of space.

“Through the new design, we created a one-stop shop for health care, including public health, primary care, dental care, emergency care, inpatient care, diagnostics and pharmacy,” Campos says. “Patients can access the level of care most appropriate to their needs at one facility.”

The hospital also developed a pain-intervention clinic that uses C-arm fluoroscopy, housing it in the space earmarked for future technologies. Since March 2014, clinicians have performed 4,665 outpatient procedures in that room and reduced patient reliance on opioid therapy. That service line is now the largest segment of its business, drawing patients from throughout the state.

Ultimately, the layout allows patients to access the public health office for immunizations or records; women, infants and children services; or family planning. It also allows staff to navigate patients appropriately to the primary care clinic from the ED when the clinic is open. Patients who present to the clinic with emergent needs can be transferred quickly to the ED or admitted to the hospital. Having an on-site retail pharmacy ensures that patients receive their medications quickly and reduces unnecessary visits to the ED or clinic.

“I knew we had hit a home run when I overheard a young mother state how cool it was to visit her doctor, and then go to the public health office to immunize her baby while she waited for her prescription to be filled — all at one place in a short time period,” Campos concludes.

Across the country in Wadesboro, N.C., a new hospital was needed to bring medical care to the 21st century in a rural area.

Atrium Health, Charlotte, N.C., opened Carolinas HealthCare System Anson, a 15-bed, financially sustainable hospital with a focus on primary care in Wadesboro, to replace a 52-bed community hospital. The 43,000-square-foot facility serves 25,000 people in Anson County and surrounding areas. The $20 million project was initiated in 2012 and completed in 2014.

The hospital was designed after an extensive Lean process that took more than 3,000 person-hours and 6,000 pounds of cardboard to build a full-scale model facility in a large warehouse with the goal of eliminating waste and improving flow, patient privacy and the patient experience. Brasfield & Gorrie, Charlotte, was the project lead designer and Design Strategies LLC, Charlotte, was its architect partner.

“The project rightsized clinical spaces and modernized the care environment for a historically underserved population,” Lutes says. “The creation of cost-effective comprehensive treatment options for the community has been a positive change.”

Lutes notes the importance of understanding the patient population. Nineteen percent of Anson residents are uninsured, more than one-third of adults in the county are obese, 27 percent have high blood pressure, 21 percent have high cholesterol and 17 percent suffer from heart disease. “The health system used a community-focused care model to restructure and provide care in Anson County by creating a new hospital model equipped with the services and capabilities necessary to meet patient needs,” he says.

Being able to provide the most appropriate levels of clinical care in the lowest cost setting has been a top priority. “This facility combines the urgent and emergent care the community needed and is appropriately scaled with providers and care teams to meet their daily needs,” Lutes adds.

The outpatient area includes four clinic pods, each containing three exam rooms and one waiting room. “Our former clinic had a central nurses’ and providers’ station surrounded by six exam rooms that emptied into a single waiting room,” Slaba says.

Exam rooms now have two doors — one for patients to go from the waiting room to the exam room and the other leads to the nurses’ and providers’ area. “This has improved infection control, since fewer patients are waiting in one room, and has decreased confidentiality concerns because patients can no longer overhear conversations at the central nurses’ and providers’ station,” Slaba says.

Then, in 2012, the hospital added 7,000 square feet and renovated 6,000 square feet, at a total cost of $4 million. The new construction consisted of a wing with 13 patient rooms, 11 of which are single occupancy. The renovation reclaimed two smaller patient wings with a previous configuration of seven rooms sharing one shower and tub, although each room had its own sink and toilet. The renovation also addressed the increase in responsibilities and documentation needs by quadrupling the nurses’ station and establishing an outpatient services wing for intravenous therapies.

“Privacy and infection control were both issues,” Slaba says. The new rooms feature full bathrooms and have indented entrances to create a sound barrier, because complaints of noisy hallways were common in patient surveys.

The renovated spaces also were wired with high-tech cables to enable the hospital to work toward a wireless network system. Currently, each patient room is equipped with a technology that can be used to deliver telemedicine.

With a 30 percent increase in its ED volumes over eight years, Lafayette Regional Health Center, Lexington, Mo., needed to expand and renovate its 25-bed critical access facility serving a county of 32,000 people.

The $10 million project, which began in 2017 and is still in progress, includes adding a 7,000-square-foot outpatient clinic, refreshing eight inpatient rooms and renovating its ED to increase capacity from five to nine beds. TMPartners PLLC, Brentwood, Tenn., is the project’s architect.

The previous outpatient clinic was gutted and repurposed as ED space. “Our outpatient clinic relies on specialty providers from Kansas City and we needed a more efficient layout, more capacity and contemporary amenities to accommodate them,” says CEO Darrel Box. Medical gases and wall suction were added to provide an additional four emergency bays.

With the upgraded clinic space, the hospital now can accommodate more new specialists. “We anticipate better emergency room throughput times when the additional rooms are complete as well as a more secure facility, because the upgrades now control access points to the building,” Box says.

In addition, the inpatient area was dated. “We worked to modernize this area by getting rid of a surface-mounted conduit, switching to LED lighting, flat-screen TVs, and installing upgraded sheet vinyl flooring and modernized HVAC.

Whether building new facilities or reinvigorating existing ones, health care organizations across the country are planning, designing and building to serve a changing rural patient population.

The hospitals profiled demonstrate the intelligence, dedication and innovation being brought to the task.

Karen Appold is a freelance writer based in Macungie, Pa.

Designing hospitals for the millennial generation

Planning and creating health care spaces for a young and discerning patient population.

Building hospitals in the pandemic era

Lessons in flexibility and technology learned during COVID-19.