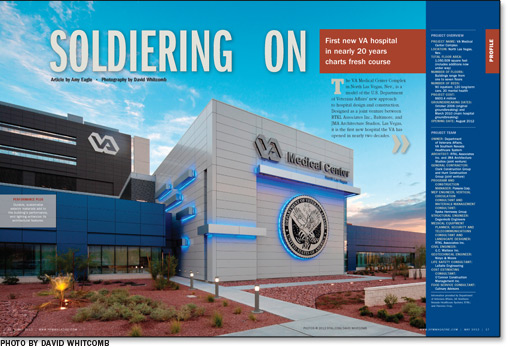 The VA Medical Center Complex in North Las Vegas, Nev., is a model of the U.S. Department of Veterans Affairs' new approach to hospital design and construction. Designed as a joint venture between RTKL Associates Inc., Baltimore, and JMA Architecture Studios, Las Vegas, it is the first new hospital the VA has opened in nearly two decades.

VAHBS, also known as the "Red Book," originally was published in 1972; it was a groundbreaking work that set the stage for much subsequent hospital design, says Scott Rawlings, AIA, ACHA, NCARB, LEED AP, vice president, RTKL. In designing the North Las Vegas VA Medical Center, the architects wanted to craft a model hospital in homage to the Red Book, but an updated version, he says. They also wanted to create a facility in which the VA can put into practice a new emphasis on patient-centered care. And they wanted to develop a master plan that would allow the VA to make good use of the campus for the next 100 years [see sidebar, Page 21].

In essence, the medical center is designed to demonstrate the VA's three guiding principles for the 21st century: to be people-centric, results-driven and forward-looking.

For patients' convenience, a number of services are co-located on the medical center campus, including ambulatory care, acute care, mental health care and long-term care. Facilities for each of these, plus an administrative and education building, are linked by a central pedestrian spine. They are "separate buildings with separate functions, but they've been pulled close together and interconnected," says Stern. This provides Las Vegas-area veterans with a range of services "combined into one easily understandable and easily usable facility," says Rawlings.

Each structure that makes up the medical center, including the central spine, is clad in a different color of high-pressure laminate panels. The color scheme helps with wayfinding on campus [see sidebar, right]. In addition, the material gives the medical center a modern, up-to-date look that's clean and bright and appealing to staff and patients, says Stern. "It's not a typical-looking red brick VA hospital sitting up on a hill," he says.

The structures are simple, rectilinear cubes designed to be very efficient in the use of square footage. Rawlings says this is in keeping with the Red Book's concepts of effective building maintenance and operation. "We were able to take a lot of those concepts and build them into these cubes a lot easier than if we'd used a different physical approach," he says. The straightforward design also allowed more of the project budget to go toward programming the medical center, rather than just getting it built.

For the most part, the buildings have a minimal number of exterior windows. The spine stands out as the primary glazed element on campus. "People can see it, and when they're walking through it, they can see outside and know where they're going. It forms a natural entry point to the campus," Rawlings says. Courtyards between buildings provide additional light and views, as well as an outdoor experience for patients and staff that is protected from the desert sun.

The outpatient center features a three-story atrium topped with a skylight, with clinics on either side of the atrium. This design is meant to help a high volume of patients move through the building each day. The clinics — except for those that require specialized equipment — are built to a modular layout to allow the VA to relocate clinics within the building as needed. "We've tried to build that flexibility in, allowing us to adapt to change quickly," Stern says.

The chassis of the inpatient building's diagnostic and treatment block is designed to adapt to future technology. RTKL equipment planners worked to create a limited number of room designs that will allow the VA to move medical equipment in and out over the life of the building without having to tear down walls, Rawlings says. The inpatient units are arranged in a basic racetrack formation, with patient rooms designed to be flexible, clean and efficient.

The mental health facility includes community-oriented spaces that give patients places to meet and talk together outside their individual rooms.

The administrative and education building features an exterior plaza and large auditorium with advanced media and training capabilities. This building serves as a community space and staff recruitment tool. "In health care, you have to be on the forefront of education in order to attract and retain the best staff," Stern says.

The long-term care facility is surrounded by gardens on all four sides. This building was master-planned and conceptualized by RTKL and JMA, and constructed as a design-build element by the project's general contractor, a joint venture between Clark Construction Group, Bethesda, Md., and Hunt Construction Group, Scottsdale, Ariz. The design follows the VA's newly completed planning guidelines for long-term care facilities. 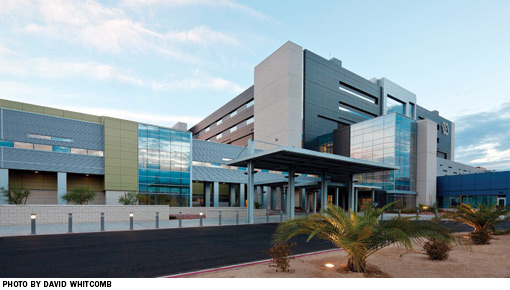 The consolidated medical center enables the VA "to provide care in a state-of-the-art facility with top-quality equipment and furnishings and first-rate staff, to meet the unique needs of the veteran," Stern says. "This new facility supports delivery of care into the future and allows us to keep the promise of the VA, 'To care for him who shall have borne the battle and for his widow and his orphan.'"

Amy Eagle is a freelance writer based in Homewood, Ill., who specializes in heath care-related topics. She is a regular contributor to Health Facilities Management.

The VA Medical Center Complex in North Las Vegas, Nev., comprises five interconnected buildings that total more than 1 million square feet. "How do you put together a building that large that can be understood easily by a 68-year-old patient? Create a campus that has a very clear wayfinding system," says Scott Rawlings, AIA, ACHA, NCARB, LEED AP, vice president, RTKL.

Each of the major service areas — the ambulatory care building, acute care hospital, emergency department, mental health facility, long-term care facility, and administration and education building — is a different color, with exterior signage to match. Staff members can instruct people, for example, to come to the gray building to be admitted for inpatient surgery. As patients arrive on campus, their destination is readily apparent. "There's absolutely no question," Rawlings says.

Separate parking areas and interior circulation routes for patients and staff also aid in wayfinding. "In the main hospital, there are only two public corridors on the whole first floor," says Steve Stern, special assistant to the director of the VA Southern Nevada Healthcare System and chief, capital asset management. "It greatly simplifies things for people finding their way around the building."

Daylight plays an important role in the medical center's wayfinding scheme, too. A public spine connects the buildings in an arrangement similar to anchor stores in a shopping mall, with protected courtyards denoting the transition between buildings. "Using those pockets of natural light, you know inherently when you're passing from one building to another," Rawlings explains. "While you're in a public movement zone, you're never in a position where you can't see outside." Outdoor views help patients and visitors naturally orient themselves within the medical center.

"People are stressed enough going into a health care environment," says Stern. "We want to make it as relaxed and comfortable a setting as we can."

When Veteran's Administration officials talk about wanting a 100-year building, they mean it, says Steve Stern, special assistant to the director of the VA Southern Nevada Healthcare System and chief, capital asset management. "I've been in VA facilities that were over 100 years old," he says. "Once we've built it, it's going to be in use for a long time." To ensure the new VA Medical Center Complex in North Las Vegas, Nev., will be adaptable and expandable into the next century, master planning was the first step in the design of the facility.

The architects considered two types of expansion in developing the master plan, says Scott Rawlings, AIA, ACHA, NCARB, LEED AP, vice president, RTKL. The first of these is new uses, or services that have not yet been developed. A road that circles the new medical center on its 60-acre site will allow facilities for these services to be placed equidistant from the main building without interfering with one another; Rawlings likens the arrangement to spokes on a bicycle wheel.

Second, the campus utility system is organized in a spine that runs across the axis of the campus, so new buildings can be plugged into the system without disrupting current operations. "We positioned it and engineered it so that you don't have to expand it or move it or shut down other systems while you expand the campus," Rawlings says.

The medical center's exterior is constructed of extremely durable, high-pressure compact laminate panels developed by Trespa International, the Netherlands. The Trespa Meteon panels are sun- and scratch-resistant, to withstand the area's desert sun and dust storms. The panel design provides great flexibility for future renovations. "If you were remodeling the building, you could take the panels down, stack them up, reorient the building and put them back up," says Rawlings.

The materials and master plan "will carry this facility and this community well into the future," says Stern.

Hospitals respond to a generation used to being in control

Plans for the health district go beyond medical care to impact educational and economic vitality.